“Shavuot: Light In The Midst Of Chaos” (Linkedin)

My new article on Linkedin “Shavuot: Light in the Midst of Chaos” 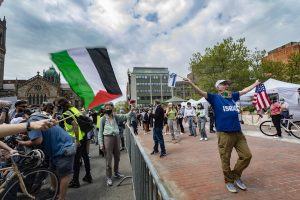 The Jewish holiday of Shavuot, the celebration for the giving of the Torah, has a special meaning this year. While Israeli society is under missile attacks, there is no festive atmosphere. It is a time to make a seminal decision about the people we want to be and how we want to face the future: in division and quarrels or to become guarantors for each other, to look at our actions through the world’s lens or through a deep introspection of our role as a people that received at the foot of Mount Sinai.

The Austrian Chancellor hoisted the Israeli flag on the roof of his office as a sign of solidarity with Israel. The Czech President tweeted a picture of his country’s flag next to the Israeli flag with a heart. Slovenia, Hungary and Poland expressed support for the struggle against Hamas, and Western governments, the UK, France and Germany, strengthened Israel with words of appreciation.

But the enthusiastic demonstrations of support by world leaders will have very limited affect, particularly if it only stems from personal sympathy with Israel. Politicians send hearts and wave Israeli flags in large cities in their countries, yet simultaneously hordes of enthusiastic people wave Palestinian flags and demonstrate against Israel.

If the clashes on the home field are not enough, then the clashes also spread abroad. In Germany synagogues have been vandalized and Jewish communities in Europe are on high alert for possible attacks and clashes.

This is the real way humanity looks at us, not through the diplomatic smiles and handshakes that come from some world leaders. The hateful demonstrations will far outweigh the expressions of support. Hostility will replace the former friendships until we are not tolerated anywhere in the world; no place will be left where a Jew will be able to live in peace.

But there is a way out. It is through our unity. Rabbi Akiva said, “Love your neighbor as yourself is the great rule of the Torah” (Jerusalem Talmud, Nedarim). When Israel received the Torah it received a power that elevated them above their egoism and division—the root cause of all the threats the Jewish nation faces—and made them love each other as themselves. It reminds us that only if we unite will we succeed. Otherwise, the Talmud warns us, “There will it be your burial” (Shabbat 88a, Avoda Zarah)

Mount Sinai, the place where we received the Torah, symbolizes thoughts of siná, hatred toward each other. From the time of ancient Babylon to this day, the ego has not stopped growing and overpowering us, demanding more at the expense of others and tearing us apart as Jews. And there, at the foot of the mountain, we were first required to make a far-reaching decision as a people: either we would be united as one man in one heart or we would endure ongoing suffering and external pressure.

There is no sooner or later in the Torah, these are eternal laws. What we go through in these difficult days is another link in a chain of predicaments we have experienced as Jews throughout generations. The external pressure today requires us to unite and create a protected space between us.

We received the Torah, the method to connect us, the means to cover all crimes with love. This is how we became a people, the Jewish nation or “Israel,” which stems from the Hebrew words “Yashar Kel” (“straight to the Creator”). It refers to a state where we are granted the method to attain the Creator, the quality of love and bestowal, through our freewill.

The connection between us, the Jews, harnesses what the wisdom of Kabbalah explains are the seventy roots of the nations of the world. We are included in them and involved with them after a long exile in which we have absorbed those roots. Therefore, if we connect, we will radiate the power of the connection between us to all of humanity. The roots will all come together and grow into a strong tree that bears fruit for everyone, each and every one. And the stronger we become, the more we will radiate light to the nations of the world, and the more we will gain the world’s support as chaos will transform into peace.
[282453]

Does Kabbalah Give A Person Freedom Of Choice?

What Will Help Us Defeat Evil
Podcast Powered by podPress (v8.8)