My new article on Linkedin “Pariahs” 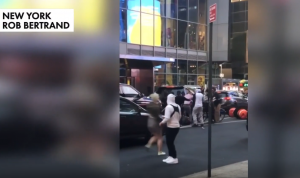 All over the world, and on every social media platform, antisemitism is thriving. What’s more, no one seems to want to stop it. Had Jews expressed themselves this way toward people from other ethnicities or countries, they would have been expelled, banned, boycotted, and possibly tried as criminals. But when it comes to bashing Jews, it’s open season. Why have we become pariahs?

To answer this question, we must remind ourselves of our origin and our vocation. In the prologue to his book A History of the Jews, Christian historian and novelist Paul Johnson eloquently describes the sense of purpose that pervades the Jewish people, and to which he, as a Christian historian, was very receptive: “No people has ever insisted more firmly than the Jews that history has a purpose and humanity a destiny. At a very early stage in their collective existence they believed they had detected a divine scheme for the human race, of which their own society was to be a pilot. …The Jewish vision became the prototype for many similar grand designs for humanity, both divine and man-made. The Jews, therefore, stand right at the centre of the perennial attempt to give human life the dignity of a purpose.”

Indeed, from the very beginning, Jews were not as the rest of the nations. We didn’t come from anywhere in specific. Rather, we came from everywhere to follow a specific ideology that the son of a Babylonian priest by the name of Terah had conceived. The son’s name was Abraham, and the message he conveyed was clear and simple, though hard to carry out: “Love your neighbor as yourself.”

At the time when Abraham began to preach for mercy and camaraderie, his countryfolk were in the midst of a wave of growing egoism. The Babylonian empire, where Abraham was born and raised, later became known as the “cradle of civilization.” But while Abraham had lived there, its people could not tolerate the idea of mutual responsibility and care for others that he had taught. They were enthralled with glorifying themselves and sought to build a tower that would reflect their greatness. Abraham, who criticized them sharply, ridiculed their beliefs and culture, and broke his father’s idols, was therefore persecuted and eventually expelled from his homeland. Thus, Abraham became the first Hebrew pariah.

Wandering westward across the Near and Middle East, Abraham continued to speak about unity and love of others wherever he went. Many of those who agreed with him joined him and gradually formed a group made of strangers who began as alienated, and often hateful strangers, but who nevertheless believed in unity above animosity.

Generations of trials and tribulations had solidified Abraham’s group until they were declared a nation at the foot of Mt. Sinai, named after the Hebrew word sina’a [hatred], which they had overcome in order to become a nation. But the nation of the Jews was unique. Since they did not have a common origin, but consisted of people from all over the ancient world, whenever they could not maintain unity above their estrangement, their different roots emerged within them and pitted the members of the nation against each other. As a result, in order to maintain their nationhood, they had to constantly reinforce their unity and solidarity. And since their roots were from many foreign nations, yet they had proven that cohesion among strangers was possible, they became a role model of peace among the nations.

This was their vocation, the purpose that Johnson had so perceptively observed. The ancient Jewish society became a pilot for a plan to establish peace on earth, harmony among all nations. When they were united, they were a living proof that such a feat was possible, thus carrying out their task to be “a light unto nations.” But when they succumbed to division and enmity, they proved that humanity was hopeless and doomed for eternal warring.

This is why whenever Jews show hate toward each other, the world hates them, too, and treats them as pariahs. Conversely, when they unite, they become the world’s favorite. Since the roots of the members of the Jewish people lie deep within each nation that emerged from the ancient cradle of civilization, the enmity or unity among the Jews reflects itself directly in relationships among the nations. This is why they blame the Jews for the wars among them. They cannot explain it rationally, of course, but they feel that their hatred for each other is the fault of the Jews. As history has proven, no rational argument will convince them otherwise.

This is also why when Jews unite under the pressure of the nations, the nations’ animosity subsides. Inadvertently, the unity of Jews eases the world’s hatred toward them since their unity increases the unity of the world, even if they do not mean to do this and are unaware of it. If Jews were even slightly more conscious of their ability to help the world unite, I have no doubt they would pursue it heart and soul. The problem is that they insist on denying their uniqueness, their vocation and purpose, and that their society must once again be a pilot for world peace. Until the Jews accept this, they will continue to be pariahs.
[282829]

A Righteous Person See All Parts Of Creation Connected

“Where Have All The Workers Gone?” (Linkedin)
Podcast Powered by podPress (v8.8)