“Jews Are Sitting On A Powder Keg” (Linkedin) 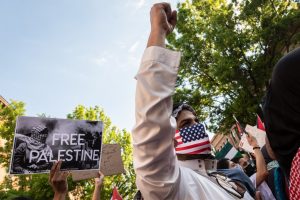 There is a sense of imaginary peace after the Israel-Hamas ceasefire, but abroad, the fuse of antisemitism is again lit and flaming. Jews both in Israel and basically anywhere in the world are in a constant war for their lives, looking to their backs, keeping an eye on their surroundings because danger can arise at any given moment from both obvious and unexpected places. What else do we need to face up to in order to understand that the world has a problem with Jews? Both Israel and the Jewish people are basically standing alone. Therefore, the only place to find a solution to the hatred is between us, in our willingness and capacity to unite.

Since the beginning of Operation Guardian of the Walls launched by Israel to defend its population from thousands of missiles attacks from Gaza, there has been a sharp spike in antisemitic incidents around the world, as well as international condemnation of the Israeli military response. The perpetrators of these antisemitic attacks deliberately singled out and targeted synagogues and Jewish institutions. The incidents occurred in broad daylight and included verbal and physical aggression against Jews in the plazas, restaurants, and streets of major cities across the United States, Europe, and Latin America, among other locations.

American Jews say they fear to identify themselves publicly as Jews. Some have taken off their Star of David necklaces, some have considered removing the mezuzot from their homes, and some even hesitate to walk to their synagogues.

So one may ask why is it that Jews are taking the hit for Israel’s actions which have been judged as wrong and unjustified by the world? Very simple. People have a problem with Jews in general. Therefore, they lash out against the State of Israel, against the Jewish people, and will be happy to erase both completely.

Our enemies point out very precisely that what needs to change can be found with us, within the worldwide Jewish community. We need to reconnect to and strengthen our common identity as a people whose existence is eternal because we were given a special role to carry out in the world: to unite in love above all differences and to help others do the same.

Within this united amalgamation, our differences will remain, as they are an integral part of the fabric of who we are, but rising above them is mandatory. We can either annihilate the threats against us by establishing unbreakable connections above whatever separates us, or our enemies will annihilate us without mercy.

Foremost Kabbalist Yehuda Ashlag (Baal HaSulam) wrote about the tendency of the Jewish nation to draw closer together when danger lurks: “It is the common suffering that each of us suffers being a member of the nation. This has imprinted within us a national awareness and proximity, as with fellow-sufferers. This is an external cause. As long as this external cause joined and blended with our natural national awareness, an odd kind of national love emerged and sparked off this jumble, unnatural and incomprehensible” (The Nation). But now, we see that even in times of trouble we are not banding together!

Until there is a need for a connection between the factions we have built in our far flung Jewish community, and until we transcend the conflicts and arguments that incite hatred between us, the external wars will not stop. They will only become more intense.

Many Jews in the Diaspora are trying to disassociate from Israel, and by doing so, they increase the pressure on us inside Israel and cause the realization that we stand completely on our own. Each community will stand alone then if that’s what they want. They can unite and take care of themselves for their own sake. And those living in Israel will have to do the same until we reach the critical integration necessary to face our existential threats.

In the final analysis it comes down to this: The more we indulge in indifference to our only mission—the crafting of the unity subconsciously expected of us by all the nations of the world—the easier it will be for our enemies. Our enemies will not even have to fight with weapons; they will need no rockets or missiles. What for, since all of humanity is ready with its forces, systems, and fronts to fight together with Hamas against Israel? All of humanity—from America and Russia to faraway China—everyone. In every country in the world, in every government, there are enough people who will be happy to abolish the legitimacy of the State of Israel and the people sitting in it and to wipe us off the face of the earth.

It is difficult for us to hear that the source of the problem lies with us; it is difficult to realize the enormity of our role and the responsibility placed on us, the reason for all this hatred directed at us. It tends to enter one ear and exit from the other. But we must listen and act with all haste. The heart of the Jewish nation is very broken, shattered, and grounded within egoism, but there is no choice but to strive at every moment to reach the connection between us until our collective heart begins to awaken and beat. Once we realize our mission and unite in love, we will discover that sitting on a powder keg need not be our destiny. Instead, our loving unity will create a peaceful garden around us where we can calmly sit.
[282767]

“Guardian Of The Walls – The Day After” (Linkedin)

“What Does True Love Really Look Like?” (Quora)
Podcast Powered by podPress (v8.8)