I’m not interested in all these labels people apply to Israel. My view of Israel is guided solely by authentic Kabbalistic sources that I have been studying for over forty years now.

Nonetheless, taking into account the vast amount of Arabs in Israeli society who share equal rights as Israeli citizens, whom you will find studying at universities and in a whole range of respected professions, such as lawyers and doctors, I would not consider Israel an apartheid state. Apartheid is something completely different.

Yet the various categories that people place Israel into do not matter to me. What does matter is the growing need for the people of Israel to realize their role in the world: to unite (“love your neighbor as yourself”) and be a conduit for unity to spread worldwide (“a light unto nations”). 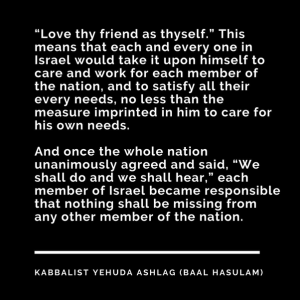 I need to realize that as a Jew, I ignite the hatred that others have toward me. In other words, if I fail to work on connecting positively to others, starting from a positive connection to the people of Israel, then I stimulate the massive human ego—the desire to enjoy at the expense of others—which brings division and hatred to humanity. Accordingly, negative sentiment toward Israel and the Jewish people grows from one day to the next, leading to decisions that are based on this growing hatred. Therefore, what do I have to fight if I myself give rise to that hatred against me?

All I see in such negative stereotyping of Israel is that we fail to act as we need to. I attribute nothing to Israel’s critics and haters. If the people of Israel would operate according to what made them the people of Israel to begin with—a group that aims at its increasing unity according to “love your neighbor as yourself” in order to spread unity and love to the world—then the world would respond positively to Israel. By uniting and generating a positive force among themselves, people worldwide would feel a much more harmonious, balanced, happy and confident sensation surface within them, myriad problems and crises would thus subside, and the attitude toward Israel would also invert from an increasingly negative one—as it currently is—to one that respects and loves the people who bring unification and goodness to the world. The nations of the world are like a shadow of the actions of the people of Israel.

“The Israeli nation was to be a ‘transition.’ This means that to the extent that Israel cleanse themselves … so they pass their power on to the rest of the nations.” – Kabbalist Yehuda Ashlag (Baal HaSulam), “The Love of the Creator and the Love of the Created Beings.”

The Mystery Of The Unification Of The Masculine And Feminine, Part 9

“Did The Ten Commandments Come From God?” (Quora)
Podcast Powered by podPress (v8.8)