My new article on Linkedin “Drowning in Migrants” 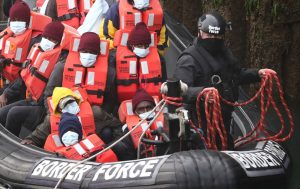 Europe seems to be drowning in a new wave of migrants from Africa. Italy, Spain, and Greece are seeing an upsurge in migrant numbers, new stories of migrant boats drowning, and new stories of entire towns and regions in Europe becoming “awash” in migrants. If the trend continues, in a few years, the entire southern shoreline of Europe will become Muslim. Migrants will swamp it, Islam will take over, and Democracy, precisely the ideology that has allowed migrants to settle in Europe, will be a thing of the past there.

It will not stop in southern Europe. Despite some resistance, the same scenario will unfold in central and western Europe. The Muslims who have come there since the beginning of the wave in 2015, and those who have been there for twenty or thirty years, have formed a comfortable cushion for newcomers. They will not need to change their culture, as did the first immigrants who moved into Europe some thirty years ago. The new migrants will feel very much at home among their fellow Muslims, and the native Europeans, both secular and Christian, will succumb to the newcomers’ takeover of Europe.

Regrettably, the mandatory education program that I wrote about years ago has not been implemented to this day, and as a result, the situation now is even more dire than before. However, there is still time. The only way for Europe to avoid a transformation into a Muslim continent is to employ mandatory education on everyone who comes there before they come, and on all those who have come recently. That way, those who are unwilling to change will not be allowed to migrate, and those who do, will know where they are coming and how to conduct themselves according to the European spirit of democracy and socialism.

Another crucial element that must pervade through the educational system that Europe must employ is the concept of the oneness of humanity. People must understand that we are interdependent, that a problem anywhere is a problem everywhere, as the coronavirus demonstrated all too well over the past year and a half.

Today, understanding our mutual responsibility is the most important since our lives depend on understanding it. If people living in conflict areas will understand that the conflicts between them will not be solved by war, that they must form unity above their differences, yet without eliminating those differences, they will transcend the problems that plague the world today. If they do not understand it and struggle with each other to impose their own beliefs on others, it will demolish everyone, losers and winners alike.

In an interdependent system, where everything is part of the whole, the well-being of one part affects the well-being of the entire whole. Think of a ball full of air. As long as it is full, you can play with it and enjoy it. But if there is a tiny hole in the ball, the entire ball becomes deflated and completely useless. This is how we need to think of humanity. If Europeans can teach themselves this simple truth, they just might be able to save their home and become a prosperous continent once more.