“Why Are There People Hostile To Israel?” (Quora)

Michael Laitman, On Quora: “Why are there people hostile to Israel?“

Some special individuals still feel from the root of their soul the unique importance of Israel. They are called the “righteous of the nations.” According to their root, and not according to Israel’s current status, they feel that Israel is a good place, and that the people of Israel will reveal the method of connection to humanity. 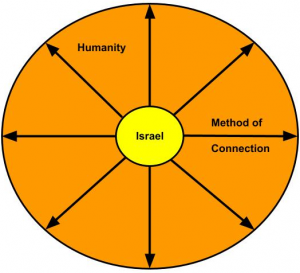 The people of Israel’s role is to come together, and by doing so, become a conduit for the force of love, bestowal and connection to stream through to humanity at large. The revelation of such a force will clarify to everybody how to live together with positive attitudes dwelling in everybody’s connection. This is what the “righteous of the nations” feel about Israel.

At the moment, the people of Israel are positioned opposite that state. Egoism and divisiveness tears away at the nation, which distances them from connecting positively to each other. This is the reason for so many people’s hostility toward Israel. Beyond various reasons that appear on the surface that many people come up with for their hostility toward Israel, on a deeper level, it is the fact that the Jewish nation is divided and failing to realize its fateful role in the role—to unite and become a conduit for humanity to positively connect through their unifying example. This is what it means that Israel needs to bring the world the method of connection and correction, and for the time being, more and more people feel that Israel is a source of division and hatred in the world.

If the people of Israel became a connected whole, the world would also change, and all hateful and hostile attitudes among the nations of the world toward Israel would disappear.

Desire—The Basis For The Functioning Of The Universe

“Can Left Handedness Be Corrected? If Yes, How?” (Quora)
Podcast Powered by podPress (v8.8)