When The Ego Grows

Question: When I feel great and have a desire for new knowledge and an interest in spirituality, I am suddenly thrown to a level of the lowest desires and I cannot understand why? Is it possible that this happens in order to awaken desires?

Answer: It is a good thing! It means that you already see that following sublime desires, dreams, and impulses, a yearning for the friends, for the group, and for the Creator, for the elation of the internal spirit that fills you; there is a sudden collapse. It is as if all the air has been taken out of your lungs and you feel that you have no desire to move forward, and that there is nothing to move forward to in any way. This is a sign that you have been given another portion of ego. 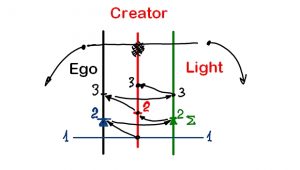 Suppose you are in phase 1, in which everything is good. Then you are given another portion of ego and you ascend to phase 2, but it is egoistic. The whole world suddenly becomes empty, dark, worthless, hopeless, stressful, and depressing. Now you need to begin to work in the group in order to ascend to a similar state on the level of the light.

The only way to do this is by your efforts to connect to the group: ∑, the summation sign.

The moment you attain a certain connection between you, you will immediately receive the light.

This is how you ascend to the state that is already your next spiritual level; you start with the left line, and then advance along the right line to the middle line. It is from this level that you will begin to receive another portion of ego, and from it you will move to a state of bestowal and once again ascend to the next spiritual level. This is how you ascend until you realize at a certain point that the Creator is revealed between you.

Then you will see that you have already taken off your shirt and thrown it into the laundry basket, which means that you have entered the spiritual level, and that your corporeal body is actually meaningless, that you are in this world for the time being in order to spread the method of Kabbalah to others, and you already feel the increasingly growing connection with the Creator on the middle line.
[246557]
From KabTV’s “Fundamentals of Kabbalah” 1/20/19

Related Material:
The “Left Line” In The Group
The Mechanics Of Ascension
The System Of Bestowal

What To Do With The Knowledge Kabbalah In Practice?

Consciousness In The Lower Levels Of Matter
Podcast Powered by podPress (v8.8)