“Are Jews Also To Blame For The US Border Crisis?” (Linkedin)

My new article on Linkedin “Are Jews Also to Blame for the US Border Crisis?” 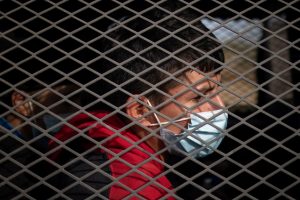 The situation at the border should be called by its name, a crisis. The U.S. border crisis is close to a disaster for the country on multiple levels, first and foremost, the human. Nearly 19,000 children and teenagers traveling without a parent were stopped by U.S. Customs and Border Protection in March, the most ever in a single month. Those children joined already crammed cage-style detention centers where they stay in deplorable conditions, are at risk for contracting coronavirus, and allegedly are exposed to physical violence and sexual assault. What does this forbode for the future? And what does it have to do with the Jews?

So we may ask, “How could the border crisis possibly be connected to us?” The link stems from one reason: we live in a global world, a network of intricate interconnection, in which Jews are held accountable for everyone’s well-being, or conversely, for everyone’s predicaments.

Illegal immigration to the U.S. is not a new phenomenon, but with President Biden coming to power and abolishing Trump’s “zero tolerance” policy, the borders have been literally overrun. Immigrants from Mexico and Central America feel the doors are wide open. As a result, in March alone over 170,000 migrants were apprehended at the U.S.-Mexico border, a 71% spike over February’s official statistics, and the pace continues to accelerate.

I am not a member of the UN or any international human rights organizations that deems it their responsibility to fix the immigration problem. Rather, I am a public figure who agreed with Trump’s rigid stance regarding building a wall to make clear that without a visa, there can be no entry. Only then would it be possible to consider the right steps for the absorption of immigrants so that the mental and physical anguish at the borders could be avoided, at the very least.

For now, all the steps of President Biden and those around him are aimed at undoing the political trajectories that Trump established during his time in office. This obliges Biden and those who follow him, to begin again from the ground up. The question is how high will the human cost be to start over from scratch? How much suffering and sorrow, hunger and pain will be endured?

Nothing good will come out of this new policy of open borders, only social collapse. America may well sink. Entrepreneurs and businessmen, one by one, will begin to abandon the land of opportunity, that is diving into misfortune, instability, and insecurity, and will look for new possibilities in other countries like Canada, even Cuba will look more promising.

Just as the American forefathers emigrated from Western Europe to America, so too will businessmen and entrepreneurs begin to migrate outside the borders of America to set up factories and offices, establish banks and businesses. These new changes will shake the United States to the core.

The people who rule the country will be unable to control the chaos g and will lead society to total destruction in the so-called name of “democracy.” From the incompatibility of worldviews and general dissatisfaction with the direction the country is heading, social unrest may erupt.

American society, in all its sectors and communities, is in a process of gradual evolution. Until the desired maturity is reached, there must be a stable government with leaders who have a vision of the nation’s progress, who know how to wisely motivate millions of people to move the country forward.

This is how England, Germany and France were built over hundreds of years. It is impossible one fine morning to allow millions of immigrants from underdeveloped countries to enter and expect them to suddenly assimilate into society. It is impossible to instantly extend to them the reins of power in the name of liberalism without completely disrupting the process of smooth development.

I do not underestimate the will of migrant workers or the situation of refugees suffering from poor conditions and without basic human rights in their homelands. On the contrary, my heart goes out to each and every one of them. But at the political level there are laws and protocols that need to be followed. An integration program must be established as part of the U.S. immigration policy, a process to allow each immigrant to learn the language, get to know the local culture in depth, and understand the laws and norms accepted in society.

This can only happen under leadership that designs and implements a clear and orderly plan. A government that does not know how to stop the crisis before it explodes will inflict disaster on itself. And for now, the Biden government appears to be degenerating into total mayhem.

Although the Biden administration is now preoccupied with its breached borders, when the storm subsides, its next “problem” to tackle will be the State of Israel. In the current U.S. government’s sweet dream—which is a nightmare for most Israelis—a Palestinian state will be established on Israeli soil and that will be our end. While there is silence on this issue now, later the increasingly malicious message against Israel will resonate loud and clear. From there the road to inflicting wounds on the Jewish state is short indeed.

And why would such thoughts even arise in the heads of the American administration? Because the Jews who supported and still support Biden are willing to risk Israel’s future. This may sound like rough stitching between two entirely different conflicts, but no. The border crisis in the U.S., along with many others, is like a snowball beginning to roll from the top of a very steep slope, accumulating problems and troubles along the way. Just as Jews have historically been accused of being responsible for pestilences and conflicts, the same scenario will unfold here. We are one step closer to also being blamed for the border crisis, as antisemites proclaim, “the Jews are guilty of all the evil in the world!”

So we may ask, “How could the border crisis possibly be connected to us?” The link stems from one reason: we live in a global world, a network of intricate interconnection, in which Jews are held accountable for everyone’s well-being, or conversely, for everyone’s predicaments.

There is a general perception that Jews are not performing the role assigned to them by the ancient wisdom they hold, the secret of eternity, which they fail to reveal to every person on this planet so we can all achieve the ultimate happiness. This ancient wisdom is called the wisdom of connection and it teaches how the world is built, what its purpose is, and how we can create one human family that functions as an egalitarian society that cares for the weak as well as the strong.

As it is written, “No calamity comes to the world but for Israel.” (Yevamot 63). The first Chief Rabbi of the Land of Israel, Rav Kook, also wrote, “Humanity deserves to be united into a single family. At that time all the quarrels and the ill will that stem from divisions of nations and their boundaries shall cease. However, the world requires mitigation, whereby humanity will be perfected through each nation’s unique characteristics. This deficiency is what the Assembly of Israel will complement.” And in the words of foremost Kabbalist Yehuda Ashlag (Baal HaSulam),“The people of Israel, which has been chosen as an operator of the general purpose and correction … contains the preparation required for growing and developing until it moves the nations of the worlds, too, to achieve the common goal.”

In a nutshell, we need to implement what is deeply ingrained in our core values and heritage, our ability to connect as one man with one heart. When we put this law of nature into practice, we will truly become a “light unto the nations,” spreading an orderly system throughout the world and radiating warmth and love. This is the one and only mechanism for fending off threats and recovering the world’s balance.
[280763]

The Creator Will Gladly Help Us

The Holocaust Is Not History But Actual World Problem
Podcast Powered by podPress (v8.8)