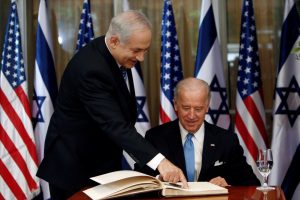 Today, Wednesday, January 20, 2021, Joe Biden and Kamala Harris will be inaugurated as President and Vice President of the United States. The US has been in decline for decades, but recently, it has accelerated to such a pace that it is threatening to bring about a complete collapse of the once mighty superpower. It is rarely acknowledged but Donald Trump did a lot of good for the American economy under the conditions he was in; I doubt that another president would have done better.

Be that as it may, Trump is going and Biden is coming, and the world is in for some very tough times, and especially Israel. How tough? Suffice to say that in my view, the question of continuing the reception of $3.8 billion in military aid from the US is not Israel’s biggest worry, and not because three quarters of it are spent on US made products. Israel’s biggest worry is that the incoming administration has no interest in the existence of the State of Israel whatsoever. This is our biggest worry, and with our wobbling government, I’m not sure how we will be able to handle it.

Yet, since there is no bane without a boon, the approaching plight might actually present a great opportunity for Israel. This is our chance to realize that we cannot rely on foreign aid indefinitely, that we must find within the strength to repel outside enemies—through our unity. In other words, I hope that since we have no choice, we will finally realize that only our union is a lasting pillar we can rely on, that this is our only weapon against aggressors. When you look at the world today, with all its “enlightened” nations, you will not find one country that does not hate us, including those who haven’t verbalized it, but soon will.

Moreover, if we were connected, we wouldn’t be facing the predicament we’re facing now. Instead, there would be more peace agreements such as we have seen recently, and no one would even want to interrupt or cripple them.

But now that the US is collapsing, Israel will dive down with it. Without America’s support, we will go down in a freefall right alongside America.

That said, if we had spiritual powers, the spirit of unity would fortify us and no harm would come to us. We would not need any foreign money or aid of any kind.

After we fall, the collapse is certain to awaken us, the price we will have to pay over many years is too high to express. I truly hope that we will still manage to awaken people so that they want to achieve correction in a calmer way. My true wish is that they will see the necessity of connecting without the suffering that’s lurking right around the corner, but for now, I don’t see that it is even possible to talk about it, that anyone is listening, understanding, or feeling anything in that direction. No one understands that we have no choice but to unite. The obtuseness in people’s hearts and minds is so thick that it seems impossible to penetrate.