My new article on Linkedin “The Ancient Divide Is Menacing Today” 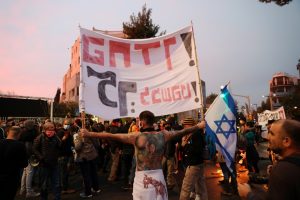 You can always tell when a youth becomes a grownup: It’s that shift in their attitude when instead of blaming others for their misfortunes, they examine themselves soberly, learn what they did wrong, and work on improving it so it doesn’t happen again. Our nation, too, has an attitude, and that attitude determines our fate. When we are mature and examine ourselves judiciously, we succeed. When we lean toward the victim’s narrative, we are victimized.

Since the onset of our nation—when we came out of Egypt and established our nationhood by pledging to unite “as one man with one heart” and be “a light unto nations”—we have been divided into two groups. One group followed the spiritual idea of sticking to the rule, “Love your neighbor as yourself.” These people went through ups and downs in their level of unity and often fell into deep hatred, yet they always came through and united above their divisions. They saw in their divisions a calling to reinforce their unity even more. The other group that formed back then took to observing various customs and traditions. They were satisfied with observing rituals and did not seek union of hearts because they did not see this as the core of Judaism.

The divide between the two groups was never bridged, and over the years, hatred and alienation have developed between them. These two groups might have been able to live side by side peacefully were it not for the vocation of the Jewish people. We were not created to follow rituals and observe customs and traditions; we were created in order to be a light unto nations, to set an example of unity “as one man with one heart.” If we omit the element of unity from our Jewishness, we lose the meaning of our peoplehood. This is why our Torah states, “Love your neighbor as yourself” (Lev. 19:18), and why our sages wrote explicitly “What you hate, do not do unto your neighbor. This is the whole Torah, and the rest is commentary” (Shabbat 31a). Of course, hatred sometimes erupts, but it is precisely so as to show how to rise above it by increasing our unity. This is why King Solomon wrote, “Hate stirs strife, and love will cover all crimes” (Prov. 12:10).

The Book of Zohar, too, explains why we have disputes and why it is vital that we rise above them and set an example to the world. In the portion Aharei Mot, The Zohar writes, “‘Behold, how good and how pleasant it is for brothers to also sit together.’ These are the friends as they sit together and are not separated from each other. At first, they seem like people at war, wishing to kill one another … then they return to being in brotherly love. …And you, the friends who are here, as you were in fondness and love before, henceforth you will also not part from one another … and by your merit, there will be peace in the world.”

For many centuries, our forefathers fought to maintain their unity despite the chasm. When they succeeded, they thrived. When they failed, they were punished and banished by foreign rulers such as Nebuchadnezzar, King of Babylon, in the First Temple, and Titus, the commander in chief of the Roman legion, in the Second Temple. However, our forefathers did not blame Nebuchadnezzar or Titus for their woes, although both committed their said atrocities against our people. Instead, our forefathers blamed themselves, their own people, for their lack of unity, for slandering each other, for shedding blood, and for hating one another. After the ruin of the First Temple, we reunited in Babylon due to the threat of destruction that came from evil Haman. Soon after, we were given back the land of Israel. After the ruin of the Second Temple, we dispersed, immersed ourselves in the nations around us, and lamented our misfortune. As a result, we remained persecuted, used, abused, banished, and murdered for two millennia.

In the late 19th century, we started to take matters into our own hands and established the movement for creating a Jewish sovereign state once more. We still did not realize the significance of unity above all divisions to our nation, but we abandoned the victim narrative and started to work on a solution. After the Holocaust, the nations decided to give us a chance and granted us sovereignty in the land of our fathers.

Here, we abandoned the victimhood narrative but developed a new, even more sinister narrative: hubris. We think we are powerful, we think we’re entitled, and we think we are smarter than everyone else. Additionally, there is still that part of the nation that thinks that because it observes rituals and customs, it is entitled to protection from above. The one thing no one thinks about is unity. Instead of setting an example of unity, we have become an example of conceit, entitlement, and mutual disgust.

And just as before, by doing so, we have turned a powerful empire against us. The new administration in the US is anti-Israel and seeks to abolish the Jewish state, to strike it off the map. We should have no qualms about it. If we want to thwart its scheme, our only weapon is our unity. Otherwise, it will succeed, and we will be left with nothing but our narrative of victimhood. But just as before, our misfortune will not come to us because of any outside ruler, but because of our own division and mutual hatred, which we have cultivated instead of mutual responsibility and loving our neighbors as ourselves.

We have no time to lose. If we do not rise above our hubris, stop childishly blaming others for our woes, and begin to take matters into our hands and unite very, very soon, we will not be able to save our country.
[277698]