Joe Biden hasn’t even been inaugurated but we already hear that he wants to resume the nuclear agreement with Iran. The New York Times wrote as early as November 17 that Biden “has promised to move quickly to rejoin the nuclear deal with Iran,” and The Times of Israel wrote on January 16 that according to a report, “Officials in the incoming Biden administration have already begun holding quiet talks with Iran on a return to the 2015 nuclear deal.”

For four years, Donald Trump did his very best to stymie Iran’s nuclear plans to build an atom bomb. His success was very limited, but it did slightly hinder their progress. Now Biden wants to return to the 2015 agreement that Obama signed. This means that the Iranians will return to full speed development, if they haven’t already got a bomb, and the monitoring of the International Atomic Energy Agency (IAEA) will be as “efficient” as it was before Trump scolded them for their inaction and withdrew from the agreement. Now, the new administration will let the fox guard the henhouse once again.

I’m not optimistic about this because I don’t see that Iran has any interest in making peace or even lowering the flames with Israel. In fact, their struggle is not with Israel as such, but with the rest of the Arab world. Israel, in this case, is just a means to an end, and the aggressive extremism serves the Ayatollahs very well. They have no other country against which to show off their devotion to Islam so they use the Arab-Israeli conflict as a pretext to show off their orthodoxy.

They also don’t care about their own people—whether they suffer from the sanctions or even from bombs, as long as they can maintain their prominence and clout in the Arab world. So, because their hatred for Israel is not the issue, but the internal struggle in the Arab world, there is really nothing that Israel can do to mitigate the conflict. All it can do is protect itself militarily.

We’ll see what happens in the future, but for the time being, this is yet another issue that doesn’t look promising as we begin the new year with a new administration. 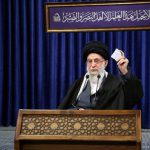 Stages Of Devotion Of The Soul
Podcast Powered by podPress (v8.8)