“Being An “Objective” Jew In The Biden Administration” (Linkedin) 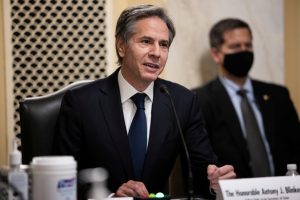 While many Jewish media outlets hail the proliferation of Jews in the Biden administration, I don’t see this as something to be proud of. For American Jewry, it is no reason for optimism, and from Israel’s perspective, this is not good news.

American Jewry has worked very hard to get to where it is. Currently, it holds key positions not only in the new administration. It has been holding key positions in both Democratic and Republican administrations for many years now, though not as conspicuously as in this one. American Jewry holds key positions not only in politics, but also in business, high tech, traditional media and social media, including of course the big tech companies currently under fire by Republicans for their purportedly biased treatment of Donald Trump and his supporters. American Jews are prominent in culture, entertainment, science, academia, finance, and in the justice system. Indeed, they are at their zenith.

And as always with the Jews, after the zenith comes the nadir. Antisemitism has been rising all over the world at least since the turn of the century, and the US is not trailing behind the rest of the nations. The heydays of Jews were the 80s of the 90s of the previous century, but those days are gone and they will not return. From here on, it’ll be a long and painful downward slide.

As for the State of Israel, the presence of so many Jews promises nothing. If anything, it portends troubles. When a Jew is at the helm, it usually spells trouble for Israel. Even if a Jew is pro Israel, he or she will be hesitant to show it for fear of being accused of dual loyalty. Worse yet, Jews in key political positions tend to promote anti-Israel policies and decisions in order to prove their “objectivity” with regard to Israel.

Moreover, it is a sad truth that most American Jews are hostile toward the State of Israel. Over the years, the chasm between American Jewry, the State of Israel, and the Israelis, has deepened on many levels. Israelis and American Jews disagree on key issues such as Mid-East politics, religion, and even on the definition of Jewishness and Judaism. For this reason, placing a Jew in a key political position is most likely bad news for Israel. When there are more than a dozen Jews in such positions, as is the case with the incoming administration, the bad news is dozen-fold.

Stages Of Devotion Of The Soul