Yehuda Leib HaLevi Ashlag is known as Baal HaSulam (Owner of the Ladder) for his Sulam (ladder) commentary on The Book of Zohar. Baal HaSulam dedicated his life to interpretations and innovations in the wisdom of Kabbalah, disseminating it in Israel and throughout the world. He developed a unique method to the study of Kabbalah, by which any person can delve into the depth of reality and reveal its roots and purpose of existence.

Baal HaSulam was born in Warsaw, Poland on Sep 24, 1884. At the age of nineteen he was ordained as a rabbi by the greatest rabbis of Warsaw, and for sixteen years he served as a Dayan (Jewish orthodox judge) and a teacher in Warsaw.

Baal HaSulam’s teacher was Rabbi Yehoshua of Porsov. In 1921, Baal HaSulam immigrated to Israel and settled in the Old City of Jerusalem. The word of his coming quickly spread among Jews who emigrated from Poland, and he soon became known as an authority in Kabbalah. Gradually, a group of students formed around him, attending Kabbalah lessons in the wee hours. Later on Baal HaSulam moved from the Old City and settled in Givat Shaul, which was then a new neighborhood in Jerusalem, where for several years he served as the neighborhood rabbi.

Baal HaSulam spent the years 1926-1928 in London. During his time in London he wrote the commentary to the Aris Tree Of Life Panim Meirot uMasbirot, which he printed in 1927. Throughout his stay in London, Baal HaSulam conducted extensive correspondence with his students in Israel, which were assembled in 1985 in a book titled Igrot Kodesh (Letters of Sanctity).

In 1933, Baal HaSulam published the tractates Matan Torah (The Giving of the Torah), HaArvut (The Bond), and HaShalom (The Peace).

Baal HaSulams two major works, the result of many years of labor, are Talmud Eser Sefirot (The Study of the Ten Sefirot), a commentary on the writings of the Ari, and Perush HaSulam (The Sulam Commentary)on The Book of Zohar. The publications of the 16 parts (in six volumes) of Talmud Eser Sefirot began in 1937. In 1940 he published Beit Shaar HaKavanot (The Gatehouse of Intentions),with commentaries to selected writings of the Ari. Persuh HaSulam on the Zohar was printed in 18 volumes in the years 1945-1953. Later on Baal HaSulam wrote three additional volumes containing commentaries on The New Zohar, whose printing was completed in 1955, after his demise.

In his Introduction to the Book of Zohar, Baal HaSulam writes as follows (item 58): And I have named that commentary The Sulam (ladder), to show that the purpose of it is, as with every ladder, that if you have an attic full of goods, then all you need is a ladder to reach it, and then all the bounty of the world is in your hands.

In 1940, Baal HaSulam published the first and, as it turned out, the last issue of the journal HaUma (The Nation). The journal was shut down by the British Mandate authorities after having received malicious information that the journal propagated communism.

Baal HaSulam encountered enormous difficulties printing his books. We can learn of the importance he ascribed to printing and disseminating Kabbalah from the 2003 Israel Award laureate Prof. Shlomo Giora Shohams description of his meeting with Baal HaSulam in the early 1950s.

“I found him standing in a dilapidated building, almost a shack, which housed an old printing press. He couldn’t afford to pay a typesetter and was doing the typesetting himself, letter by letter, standing over the printing press for hours at a time, despite the fact that he was in his late sixties. Ashlag was clearly a tzaddik (righteous man) – a humble man, with a radiant face. But he was an absolutely marginal figure and terribly impoverished. I later heard that he spent so many hours setting type that the lead used in the printing process damaged his health.”

This excerpt was published on Dec 17, 2004 in Haaretz newspaper, in a story by Micha Odenheimer.

Baal HaSulam did not merely put his ideas on paper; he acted vigorously to promote them. He met with many leaders of the Jewish settlement in Israel of the time, leaders of the Labor movement and many public figures. Among these figures are David Ben-Gurion, Zalman Shazar, Moshe Sadeh, Chaim Arlozorov, Moshe Aram, Meir Yaari, Yaakov Hazan, Dov Sadan and the great poet Haim Nahman Bialik.

According to Ben-Gurion, he met with Yehuda Ashlag several times, and was apparently surprised:

“Rabbi Yehuda Leib Ashlag, among the greatest Kabbalists of the time, aimed at turning the fundamentals of Kabbalah into a historic engine of our generation. Through his socialistic perception, which is based on the above, he sought contact with the Kibbutz Movement.”

It might be surprising to think that Baal HaSulam sought connection with the Hebrew Labor Movement and its leaders, considering the mental and educational chasm between them. However, deep study of his writings reveals a fascinating and intriguing figure of an erudite who was very much involved in the events of his time, both in Israel and the world over, a figure whose ideas are considered revolutionary and daring even to this day. 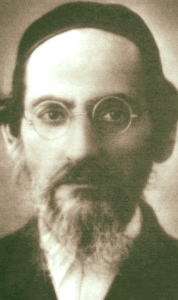 The Meaning Of Kabbalistic Books, Part 1