Medium: “10 Years To The Financial Crisis: What Now?”

Medium published my new article “10 Years To The Financial Crisis: What Now?” 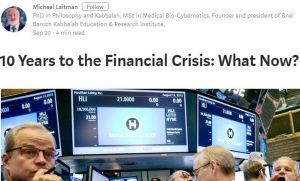 A decade after the global financial crisis, new research exposes how a small elite prevented a worldwide catastrophe. But what is the cost of keeping our increasingly unbalanced, profit-driven systems in place? What are the greater balancing forces from nature we’re up against?

A decade ago, the world was on the verge of collapse. A financial bubble in the U.S. mortgage market almost blew up the global economic system. A financial Armageddon was prevented only by unprecedented measures taken by the U.S. administration, and particularly by the Federal Reserve.

In his new book, “Crashed,” historian prof. Adam Tooze sheds light on the hidden corners of the financial crisis of 2008. Tooze uncovers the intricate financial network that stood at the heart of the storm, and how a small elite decided to inject trillions of dollars into the American banking system and the rest of the world, knowing full well that humanity would otherwise go on a downward spiral into a crisis worse than the Great Depression of 1929.

Since the crisis of 2008, the ties in the financial elite network have only tightened across the world, and today this group continuously employs financial juggling to rule the global economy. Like pawns on a chess board, they deliberately manipulate markets, consumers, interest rates, financial institutions and media, in order to perpetuate the current economic paradigm and prevent a 2008-style crisis from happening again.

So what has changed over the past decade? The economic system feels safer than before. Not because the system has become more stable or equal, but rather because it is more controlled.

The Pyramid That Rules the World

Analyses such as Tooze’s prove how the pyramid that rules the world became pointier than ever before. It is a pyramid based solely on power and money, from top to bottom. If the previous century pyramid still had some reserved seats for intellectuals, philosophers, scientists and ideological pluralism, today they are all enslaved by the power of money and its owners.

Scientists depend on funding that guides the objectives of their research; artists and cultural figures enjoy the spotlights as much as their show serves the interests of tycoons who own the media channels. Simply put, money runs the world and capitalism has become cannibalism, with a limited elite that has fortified its rule at the top of the food chain.

The Mechanics of the Global Crisis

But what’s taking place beneath the surface is the inevitable intensification of human egoism. The human ego is the natural energy that fuels the fusion of wealth and power into an unbridled force. However, this is just one side of the process.

Humanity’s development happens in two parallel and opposite trends. Alongside the constantly growing ego, there is a much less noticeable axis of global interdependence that is gradually binding together all people and manmade systems on earth.

We, human beings, are trapped in the egoistic axis and suffer from global shortsightedness.

The nature of human development requires us to tread with two legs: one leg progresses along the egoistic axis necessary for our growth, and the other leg progresses towards the sense of mutual connection between all of us. Just as we walk on both of our legs, we have to properly combine and balance the ego to channel it towards healthy and positive development for all.

Today we are lagging behind with regards to the sense of connection between us. The world is becoming more and more integral — and the human is not. How do we catch up? By raising awareness to our situation, acknowledging the interdependent global system we live in and the laws of nature that apply to it.

Nature — as an integral system that demands all its parts to be in balance and mutual connection — will require us to change. The global economy is no more than a reflection of the relationships between all people. Therefore, we must first balance our relationships, as parts of a single system who share a common destiny. When we begin to do so, we will rearrange all our manmade systems, including the economic and financial.

If we don’t raise our awareness and do this out of free choice, the balancing forces of nature will force us to do so in different ways. Shocks in the ecosystem, natural disasters or depletion of cheap energy are all examples for scenarios that will necessitate a painful change in the socio-economic order.

Interestingly, an annual Gallup poll that surveyed more than 154,000 people in 146 countries shows that “the global mood is at its gloomiest since the first such survey in 2006.” Ultimately, the 21st century will fill us with frustration and helplessness that will lead us to question the meaning of human existence. Then, from the bottom of our heart, a demand for a new world will arise.
[233735]

The Times Of Israel: “The Meaning of Our Personal Yom Kippur and Its Connection to the World“

“And The Land Of Israel Will Be Stretched To The Whole World”
Podcast Powered by podPress (v8.8)