Thank you for your warm words about my book in Hebrew Why Do They Hate Us?.

Further to your letter, it is my hope that the people of Israel will become familiar with the beauty and depth of the wisdom of Kabbalah and will use it to help reach a brighter future.

With regard to writing a sequel entitled Why Do They Hate Us?, I promise that it will be written, but to justify this, it is important that we focus on the fulfillment of our role to set an example and be “a light unto nations,” for all nations of the world.

You may download the book in Hebrew or the booklet in English with a similar message: “Who Are You People of Israel?”. 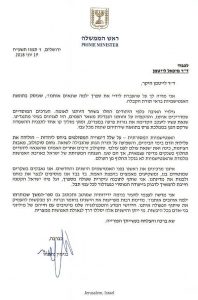 Translation of the letter to Dr Laitman from Prime Minister Benjamin Netanyahu:

I thank you for sending me a copy of your book Why Do They Hate Us?, which deals with the phenomenon of anti-Semitism from the perspective of Kabbalah.

Hatred of Jews began with the dawn of our nationhood. The moral values that guide us, and the strict loyalty to our separate identity from other nations, were as thorns in the eyes of our opponents. Esau’s hatred to Jacob preceded Pharaoh’s decrees in Egypt, and those are directly related to Haman’s extermination plan in the Persian kingdom, based on the pretext that “their laws are different from those of every people.”

Traditional anti-Semitism—with its many distorted images of Judaism—gave rise to blood libels in the Middle Ages and influenced the racial theory that led to the Holocaust. Nahum Sokolov, one of the founders of Zionism, called it “world hatred for the people of the world.” Sokolov and many others believed that hatred of Jews would pass when we establish an independent state, but they were wrong. Israel’s distorted presentation as the enemy of humanity shows that anti-Semitism will not disappear from the world easily.

We do not lower our heads before the anti-Semites, old or new. We fight the lies about us, and invest efforts in disseminating the truth. At the same time we continue to fortify our strength and build our state. I agree with the main insight that stems from your book, according to which the small state of Israel must continue to adhere to its moral destiny as a beacon of light to all nations of the world.

And allow me to offer a friendly suggestion, that you should write a follow-up book entitled Why Do They Love Us?. Many countries admire our achievements in matter and spirit. They seek to deepen their collaboration with us. Our innovations in science and technology benefit the lives of millions of people on all continents. May these achievements pave the way for the redemption of humanity from its misery.

Best of luck and much success in your fruitful endeavours.

In The Web Of The Spiritual System