Newsmax: “When Did Breastfeeding Become a Bargaining Chip?”

The largest portal Newsmax published my new article “When Did Breastfeeding Become a Bargaining Chip?” 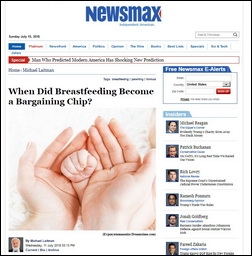 It is, and always has been, the best food for babies. There is no controversy about the benefits of breast milk, but its politicization is giving us food for thought.

The New York Times claimed that the U.S. government unsuccessfully threatened nations backing breastfeeding with punitive trade and military cut offs to favor the $70 billion dollar infant formula industry, an accusation fervently denied by the current administration. Beyond the sensational headlines, the key factor is that such an important health related topic for mothers and children has been put back on the table.

Breast milk is rich in nutrients and includes antibodies to fight off viruses and bacteria protecting the baby from infections and allergies. It boosts the immune system, reduces infant mortality, and helps for a quicker recovery from common childhood illnesses. A Harvard study in 2016 estimated that 3,340 premature deaths a year among both mothers and babies could be prevented in the U.S. alone given adequate breastfeeding. It also lowers a mother’s risk of breast and ovarian cancer, and osteoporosis.

Besides the physical benefits and what is shown through laboratory experiments, breastfeeding is one of the best ways of bonding with a baby. In addition to nutrition, it provides comfort and relaxation. It releases oxytocin, which is the hormone responsible for other loving behaviors that make us feel good about a person.

Extended breastfeeding for the first two years of life allows for the child’s proper development, and women express more maternal sensitivity well past the infant and toddler years, according to a study by the American Psychological Association.

Beyond such findings, there is also a natural inner connection between the mother and the child that allows for positive biological and internal development, which starts inside the womb, belonging to an inner layer in nature that our studies and research tools still cannot pinpoint.

Considering the vital role mothers play in each individual’s development from the earliest of ages, it stands to reason that stay-at-home mothers should be given all the support possible to raise the next generation.

However, in practice, this is not the case.

In today’s world, the bulk of the burden falls on the mother, who is usually expected to prioritize her career over her family, juggling tasks and becoming increasingly exhausted and unsatisfied. The so-called advancement of women’s rights to choose is in practice an oxymoron. At the end of the day, women who decide to fulfill a traditional role as stay-at-home mothers do not receive enough recognition, value, and economic support from society, as if raising a new generation were not the most important enterprise of all.

In most societies women struggle to have a balanced life, considering work as an economic necessity rather than liberation and personal progress. Women get caught in an ever-tightening entanglement of commitments at work and home with very little restitution at any level.

Nowadays, certain governments are considering the distribution of an unconditional basic income sufficient to meet a person’s basic needs. Such programs, if implemented, should benefit women first and foremost, particularly mothers who decide to leave the workplace in order to raise their children.

Mothers should not continue being treated as second-class citizens. Instead, they should be recognized as “society’s CEOs” — the ruling force in creation, the only ones capable of giving birth to and nurturing a whole new generation. Keep in mind that the world is our roof, humanity is our home, and women are the pillar of this structure. Nature is showing us the perfect mechanism of the human body. And motherhood in particular has a crucial role in giving birth to a new humanity.
[230333]