“Demand, Even If the Heart Refuses”

The 9th of the Hebrew month of Av came and went a few days ago, but it seems like it is always here. “Unfounded hatred,” or hatred without cause, which caused the ruin of the Second Temple and the expulsion of the people of Israel from the land of Israel two millennia ago, is still very much alive among us. It may manifest in different ways, but its destructive potential is just as immense, and unless we rise above our mutual hatred, it will inflict on us another ruin.

Today’s Israelis are not as aware of the paramount importance of unity to our people or why our sages insist on mutual responsibility being the basis of our nation. Nevertheless, without understanding these basic tenets of our nationhood, we will not be able to build here a strong country and a stable society.

The mourning for the destruction of the Temple is not about the stones; it is about the love that we lost. That love is still lost today, as our sages said, “Any generation in whose days the Temple is not built, it is as though in those days it was ruined” (Jerusalem Talmud, Yoma 1:1), and the sage The Chida explained, “for [the Temple] is not built due to unfounded hatred, which is as though it is ruined, as this was the reason for its ruin.”

Indeed, the situation is not getting better; hatred is constantly intensifying among us. The growing violence, vulgarity, and mutual cancelation are expressions of the growing hatred between us. Clearly, a country cannot survive if its factions fight against each other to the point where they want to destroy each other more than the good of the country.

Unless we get a grip on ourselves and decide that we have had enough, we will destroy our own country once again. Even if our hearts refuse, we must demand of ourselves to build it among us, to make efforts, to do things for each other that people do when they love each other, even if against our will. It is hard, but it is our only option if we want to survive as a sovereign nation. 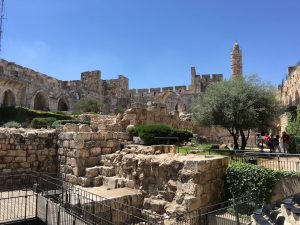 “How Close Are We to a Nuclear World War?” (Medium)