My new article on Linkedin “Connection Begins with Respect” 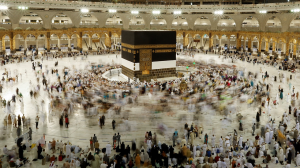 Gil Tamary is a well-known Israeli journalist. A few weeks ago, he sneaked into Mecca, Islam’s holiest city, defying an entry ban on non-Muslims. The stunt made the Saudis so angry that they tracked down and arrested the man who helped Tamary into the city, and said that they will prosecute him.

In Israel, too, the story “prompted outrage,” which grew even more “after it was revealed that his companion had been arrested.” I can sympathize with the anger. Disobeying another country’s codes of conduct is audacity and disrespect toward it and toward its people’s faith. It is tantamount to patronizing them, and I wholly disagree with it.

Where is the benefit in going against the will of the Arab world? It makes no difference whether an Israeli journalist breaks their law or the Pope; the Arab world does not want people of other faiths to set foot in Mecca. Why should we not respect that?

Synagogues, Jewish houses of worship, are very different. Anyone can walk in there. A Muslim can even pray there in his own language and in his own faith, and it will not be regarded as idol-worship. But if Islam considers such a thing a sin, we have no right to undermine it. Connection with others begins with respect for others.