“A New Beginning for Latin America Is Possible” (Medium) 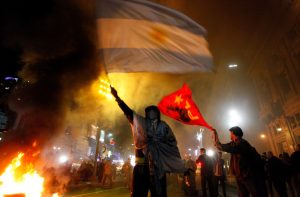 I feel great sympathy for Latin America and my students there; the socioeconomic turmoil they are experiencing saddens me and I share their concerns and pain. While the whole world is experiencing more difficult situations, Latin American countries do not anticipate a good future either, especially with the high cost of living, exacerbated by the increase in fuel prices.

The recent protests in Argentina, Ecuador and Panama, as well as in other Latin American countries, triggered by the economic crisis, are most likely just the harbinger of social unrest in the coming months. It is likely that the governments of the region will not be able to meet people’s demands for a reduction in the cost of living to appease their fears and discontent.

To overcome the crisis, I suggest that Latin Americans try to lower their demands on material life and not introduce every Western pattern offered to them into their way of life. It is good for them to lead a less developed lifestyle, and to be satisfied with what they have.

Western countries should also let them go and not try to impose their culture and consumerism on them, which the West considers a sign of progress and development. Foremost Kabbalist Yehuda Ashlag rightly wrote that “we learn what a terrible wrong inflict those nations that force their reign on minorities, depriving them of freedom without allowing them to live their lives by the tendencies they have inherited from their ancestors. They are regarded as no less than murderers.” (The Freedom)

Peace and goodness for these nations will not come through materialistic development. On the contrary, the developed nations are bringing destruction to the authentic nations around the world as once happened to the indigenous peoples in the United States. Latin Americans are no longer able to be satisfied with what they have due to the Western influence and they will not be able to stabilize and remain on the same level of existence as the Western countries.

The greatest danger Latin America faces is the uncontrolled proliferation and commercialization of illegal drugs; this is very unfortunate. These are beautiful countries with good people, but they are being destroyed by the desire to artificially raise their standard of living.

The more a nation develops, the more selfishness it develops, and with this comes distance, coldness and social alienation between people. The natural connection that once existed between people and the rest of the species and all of nature, which is the feeling that everyone is connected in one system, is lost. It must be rekindled through education and implementation instruction to truly experience lasting change for the better.

I really like the character of the Latin Americans. They have a straightforward approach to others and to the world. They are not disingenuous people who talk nicely to you while holding a knife or a machete behind their back, they do not have malicious thoughts. But today, they develop without their beneficent intention, only according to what the pocket dictates, not according to the soul. They need to make an effort and put connection between them to the forefront and exercise the mutual care and responsibility that has been lost in a conscious way.
[301318]

“On Righteousness and Being Righteous” (Times of Israel)