“What do old people and teenagers have in common?” (Quora)

Michael Laitman, On Quora: “What do old people and teenagers have in common?“

As a part of a school project, twins from the 10th grade met with a 77-year-old woman, keeping her company. The project ended a long time ago, but the connection that became established between the twins and the 77-year-old woman grew stronger, which developed into a very close and special relationship, where they spent more and more time together, eating together, and sometimes even staying over at the elderly woman’s place. The older woman mentioned that the girls brought light into her life.

Indeed, teenagers and elderly people can very beneficially complement each other. Teenagers, who have several deficiencies and insecurities, and who seek to make their way in life, can receive answers to a lot of their questions from elderly people. Older people have a surplus of knowledge, understanding and warmth, and they no longer have children whom they can pass it on to. For instance, the elderly woman in this example received vitality through her connection to the teenagers. There is also research showing how much elderly people become enlivened when connecting to children. Unfortunately, we see nowadays that after retirement, many elderly people become lonely, stay at home, and their health deteriorates, similar to flowers that start withering away.

There needs to be a system connecting those at the beginning and the end of their lives. Neither knows how to make this connection, but when that system is operating, then we would see great benefit for both age groups. I would very much recommend creating such connections as broadly as possible in different ways, shapes, forms and for different ages. 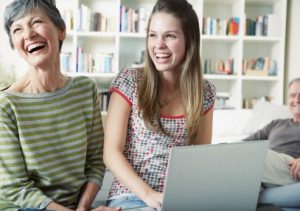 Become Worthy of Being Called Man