“How well is Israel fighting against terrorism?” (Quora)

Michael Laitman, On Quora: “How well is Israel fighting against terrorism?“

After a terrorist attack during Israel’s Independence Day this year, where people were axed down and murdered by two terrorists, there was a general sense of fear throughout the country, and it prompted one of my students to ask me about whether there will ever be a solution to Israel’s problems with the Arabs.

There is a solution, but it is possible on condition that the people of Israel would match the Land of Israel in a spiritual sense. We would then truly feel that we are the owners of this place, and we would feel protection from above, and no one would be able to touch us.

It depends solely on the connection between the people of Israel. As difficult it might be to hear, there is no other way. It is a condition that is set in nature.

The condition is that we need to positively connect, as it is written, “as one man with one heart.” By achieving such a connection, we would not only solve terrorism and physical acts of violence, but people would no longer hold even a single negative thought about Israel. Likewise, if we fail to adhere to this condition, then we have no protection.

While it might appear that we should rise up against the incitement that breeds terrorism, i.e. the glorification of terrorism and terror acts in various societies, what we truly need is to permeate our own minds and hearts. If we come together and unite in mind and heart, then we have no need to fight terrorism. We only need to be united with each other, and our unification would attract the upper spiritual force. Drawing that force into our lives would raise a canopy of peace over everyone, giving everyone a feeling of victory.

For the time being, Israel’s security forces work day and night devotedly over several years just for people in Israel to be able to live in peace. However, strengthening Israel’s security is no long-term solution in developing a true sense of security for the people of Israel. We will live in the atmosphere that we create only when we are united, and that we unite in order to reveal unity as humanity’s salvation—that it is very-much needed today. Without uniting, we will solve nothing, and we can expect terrorism and other negative phenomena toward us to keep intensifying. 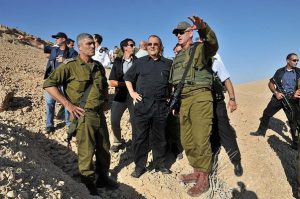 “What is a fully realized human being?” (Quora)