“U.S. Consulate For Palestinians In Jerusalem, What It Would Mean For Israel” (Linkedin)

My new article on Linkedin “U.S. Consulate for Palestinians in Jerusalem, What It Would Mean for Israel” 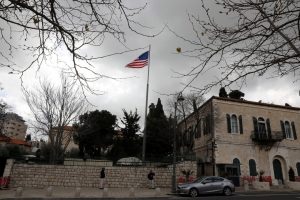 The intention of the U.S. Biden Administration to reopen a consulate for the Palestinians in Jerusalem should be a trigger warning for Israel.

The consulate was closed in 2018 by former President Trump when the U.S. embassy was moved from Tel Aviv to Jerusalem. The closure shut down our enemies’ hope for the division of Israel’s capital, a hope that will be revived if it is reopened.

A unilateral decision by the Biden Administration in that regard without Israel’s consent would not only contradict international law, but would also send a message that day by day we are giving up increasing control over almost everything —over Jerusalem and the territories, over the nation’s fabric and identity, over the exorbitant transfer of money to Gaza which afterwards transforms into weapons against us. We would be giving up on ourselves, on our right to be in the Land of Israel.

If this trend were to continue, we could anticipate great danger for the state of Israel. This process will take place if we do not realize that under the current conditions, if we do not defend our sovereignty, if we are incapable of foreseeing the danger that lies ahead and defend our home, we are not suitable for the land, not compatible with the essence of the state that should exist on Israeli soil. This unfortunate situation has materialized quickly, and it hurts me from within. I no longer have the strength to talk about it, although I have no choice.

We think we Jews are strong people. Because we survived the Holocaust and established the State, defeated our enemies in wars over the land and all the empires who wanted to destroy us throughout history, so this time too we will not be harmed. It is a mistake. We are not a strong people by ourselves—not emotionally, not mentally, not physically. Our strength comes solely from the Supreme Force that protects us; it is Nature’s ruling that directs us to endure extraordinary circumstances.

In theory, the feeling of weakness in the face of the threatening scenario in the country should cause us to mobilize forces to protect ourselves. In real life, this is not coming true. Our weakness has swept us to a bad place, just to the point of deterioration where we find ourselves today. There is no time to entertain some vain fantasy in which we will suddenly realize that we are on the downslope, choose to stay indifferent, and thrive beautifully in the end anyway. This is an illusion.

I’m not saying there is no hope. We have not yet reached such a situation in which we have no choices left because all is lost. But we must wake up and internalize that, in fact, the true danger that threatens us comes from within, the result of our separation from one another. Thus, it is up to us to fix the problem.

We must understand once and for all just who we are and for what purpose we exist. We must recognize what actually is the backbone of the nation. Our nation is not just some random group of exiles, but a precisely representative group composed of people from all the nations of the world as a diverse replica of humanity, an amalgamation that should serve as an example of cohesion for all peoples. Fulfilling that role is our calling and the source of our strength, and our strength to carry it out lies in the Supreme Force we draw when we rise above our differences and unite as a solid indivisible unit.

As it is written, “If a person takes a bundle of reeds, he cannot break them all at once. But taken one at a time, even an infant will break them. Just so, Israel will not be redeemed until they are all one bundle.” (Midrash)
[289258]

“The Sad Truth Of Our Existence, And What We Can Do About It” (Linkedin)
Podcast Powered by podPress (v8.8)