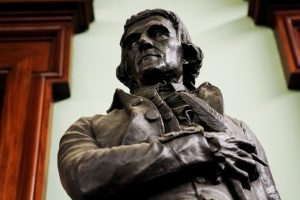 In Ontario, Canada, schools recently burned nearly 5,000 books that were considered offensive to indigenous people. In New York City, the Thomas Jefferson Statue that was crafted in 1833, and has stood in the City Council chamber since 1915, is scheduled for removal. Last year, nearly 100 Confederate monuments were removed. Burning, breaking, or erasing the past is not the right way to mend wrongs. Without acknowledging the past and educating people on what is right and what is wrong, we will never learn. We will keep on being tyrannical toward each other, and while the tyrants will change, the people will still suffer.

Only education changes us; violence only oppresses. If we believe that people are equal, we should educate ourselves toward it. We should do it by example, by showing how everyone contributes to society, how diversity increases a nation’s resilience, and how union above cultural and ethnic differences solidifies our nationhood. Since when have acts of hatred brought any benefit to anyone? Since when have they increased love?

In order to build new social values, we must know how to move out of the old ones. Take slavery, for example. It was abolished in order to free the black Americans, who were either born into slavery or brought to America for that purpose. However, instead of freeing the slaves, it made most everyone slaves: blacks, whites, Asians, and Latin Americans. We may not call it slavery, and it may be embarrassing to admit it to ourselves, but the truth is that none of us is free. We have all been equally enslaved, and we call it the free market, or capitalism. Communism, by the way, is no better. I know; I came from there.

If we want people to be free and equal, we need to teach them only one thing: how to love one another. There is no slavery or inequality in a loving family. Likewise, if people cared for one another, we would not be speaking about inequality or disadvantaged groups.

Family is a great example of building back better, by the way. If there is a dispute between siblings, and the family wants to make peace between them, will it vilify or humiliate one in order to appease the other? Of course not! Increasing love to a point where it is greater than the anger is the only way to bring them back together.

Therefore, if a nation wants to unite its members and make them equal, the only way to achieve this is by increasing unity, love, and mutual responsibility among all the factions of the nation. If we focus on these three elements, we will not need to worry about inequality or bigotry.

“What Are Some Good Ways To Reconcile Family Conflicts?” (Quora)

“U.S. Consulate For Palestinians In Jerusalem, What It Would Mean For Israel” (Linkedin)
Podcast Powered by podPress (v8.8)