“Europe Walling Up Is Too Little Too Late” (Linkedin) 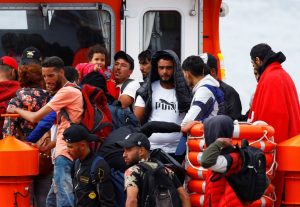 All over Europe, walls and fences are springing up on the borders between countries. Between Greece and Bulgaria, Austria and Italy, Hungary and Serbia, Lithuania and Belarus, and between many more countries, walls and fences have emerged. Unlike before, countries are not trying to protect themselves from one another, but from Muslim immigrants invading their territories. Regrettably for Europe, neither walls nor any other barrier will do any good; it is too late to save The Old Continent.

While governments have opened the borders for immigration from Muslim countries, they did not prepare the newcomers for the new culture they were about to encounter, nor check if they were even willing to amalgamate in it. Even now, when the harm of unchecked immigration has become known, European politicians are not attempting to stop it.

The only country attempting to stop the Muslim invasion is Austria, but it is alone. Over time, the pressure from other European countries to open its borders will force it to comply, and it, too, will be lost.

There will not be any fanfare or long and violent clashes; Europe has already surrendered to Islam; the deal is done. It should have stopped it long ago, but once it chose not to, it sealed its fate.

But the Muslim invasion into Europe will not be the end of the story. Following Islam, China will come with its own aspirations, and the two will squabble over the carcass.

The two powers have very different goals. Islam wants to impose itself on the entire world. If people accept it willingly, very well. If not, they will be forced to accept it or they will be executed.

China, on the other hand, wants only to control. Their one and only aspiration is world domination; they do not care about religion. I think that after some time and perhaps some bickering, they will divide the world between them one way or the other.

And in the midst of it all will be the Jews, of course. They always have been, they always are, and they always will be involved in global transformations.

Nevertheless, I think that it’s better if things develop in this way since the other option is a nuclear world war. If the process is more gradual, there is a chance that people will understand in a more peaceful way that we have to change how we think and how we relate to one another.

If people realize that egoism is the sole ruler of the world, there is a chance they will agree to start working on themselves. As power struggles prove that there is no ideology but domination and compulsion, hopefully, people will realize that this is an unsustainable course for humanity. It is better to realize this through political processes than after nuclear and hydrogen bombs demonstrate the consequences of egoism.

When people realize that we have no other choice but to stop being so selfish, we will be able to start developing a new humanity. It will not be any ideology we currently know, but a simple acknowledgment that we invariably influence one another, and that one person’s misery makes all of humanity suffer, even if we do not know this person.

As a result, we will build systems that ensure everyone’s well-being.

The awareness that a narcissistic frame of mind is ultimately destructive to the narcissist will push people out of it. Then, when we become genuinely inclusive in our mindset, we will build a society that is caring and supportive of everyone, and we will relinquish domination in favor of cooperation.

However, it must happen willingly, or it will not work. We have to reach rock-bottom, to realize that we are hopelessly malign, and that only a complete rejection of our nature will lift us out of the quagmire of cruelty. When we finally choose connection over separation, we will lift ourselves from misery to bliss.

“What Is It In Your Life That Calls You To Be Bigger Than What You Think Is Possible?” (Quora)