“A Centenary For The Refuting Of The Protocols” (Linkedin) 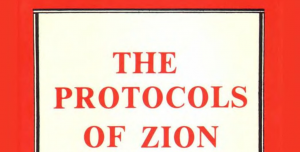 A hundred years ago, a historic event took place in the struggle against antisemitism: The London Times exposed “The Protocols of the Elders of Zion” as a hoax. At the time, the scoop was so sensational that The New York Times immediately picked it up and put it on its front page. But the truth did not catch on. A few years later, the Nazis circulated the Protocols and convinced Germany and much of Europe that the Jews were planning a global takeover. If this fake document proves anything, it is that people do not see the truth; they see what they believe.

In 1903, an unknown Russian author published a document titled The Jewish Program to Conquer the World. The publication quickly caught on and translations of it were published all over Europe. The text, which became known as The Protocols of the Elders of Zion, purported to describe a Jewish plan for global domination.

From bookstores to schools, the Protocols were treated as factual and fueled the already growing antisemitic sentiments in Europe. The Jews, who had only recently been given emancipation and equal rights, rightly feared that their efforts to amalgamate in their respective countries would be thwarted.

But in 1921, Philip Graves, a then young and aspiring correspondent for The London Times, gave them hope. That summer, while working in Constantinople, Graves “was contacted by a Russian émigré living in the city and told that this gentleman possessed conclusive evidence that a publication which had recently taken the world by storm was a fake,” writes David Aaronovitch in a story titled “The battle between truth and lies never ends,” published on The Times.

Aaronovitch writes that the evidence was “a small volume in French … printed in Geneva in 1864. It consisted of a dialogue between Machiavelli and Montesquieu, and many of its passages were, word for word, the same as in the Protocols, meaning that the Protocols, supposedly composed 33 years later, were a clumsy, plagiarised fake.”

According to the Holocaust Encyclopedia, “Other investigations revealed that one chapter of a Prussian novel, Hermann Goedsche’s Biarritz (1868), also ‘inspired’ the Protocols.”

Despite the refutations, more than a century later, the protocols are still touted as true. Some Arab countries teach it in schools, and many antisemites in both Europe and the US believe it is authentic.

It appears that changing people’s minds requires more than presenting “conclusive evidence.” To change what people think, we must change how people feel, what they believe. If we want to convince people that the Protocols are fake, we must convince them that the Jews are not trying to dominate the world. To do that, we must make them stop hating and suspecting Jews. This is how it works—from the heart to the brain, and never the other way around.

The reason that the fabrication caught on so well is that by and large, the world already believes that the Jews control the world. Publishing a transcript of some fabricated meeting of Jewish leaders conniving to take over the world sits very well with how people already feel, so it did not take much to convince them. What we should ask ourselves is not why people do not see the truth, but why they think that Jews control the world.

The simple truth is that the Jewish nation is unlike any other nation. Virtually everyone feels that this is so, including the Jews, except many of us are in denial. We developed the most fundamental principles of a humane society, and we attempted to practice them for centuries.

We were a role model, a light unto nations, and people from all over the world flocked to learn from us. We quarreled, hated one another, and killed one another, but we also united above our hatred. In presenting both extremes, we became a social experiment, a proof that people who were complete strangers when they first flocked around Abraham can ultimately unite so strongly that they love their neighbor as themselves.

No other nation possesses these abilities, and no other nation is obligated to live out these principles in daily life for the world to see. This is why the Jews are always at the center of attention. This is why whenever a predicament baffles humanity, they turn their gaze toward the Jews. If Jews respond correctly, they embrace them. If they do not, they banish and destroy them.

Jews do not control the world through some malevolent plan; they control it through the example that they set. When they are united, the whole world is united. When they are divided, so is the entire world.

For this reason, as long as we are divided we will not eradicate antisemitism. If we cannot bridge our hatred with love, the world will hate us no matter what we do or say. If we can unite above our mutual loathing, the world will embrace and love us.

In antiquity, when Jews celebrated their unity during the festivals of pilgrimage, people from the world over would “go up to Jerusalem and see Israel … and say, ‘It is becoming to cling only to this nation,’” writes the book Sifrey Devarim.

Nowadays, we do not set a good example. If we keep the world waiting for our unity much longer, we can only expect the publication of many more Protocols, and their resulting tragedies.
[287049]

“How Would You Use The Internet To Improve Your Community?” (Quora)

“It’s Not Nature’s Punishment But An Awakening” (Linkedin)
Podcast Powered by podPress (v8.8)