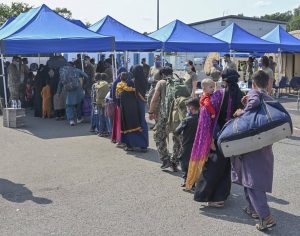 Six years have passed since Europe faced one of the worst refugee crises the continent remembers.

Since the Taliban took over Afghanistan, shockwaves resonate throughout all of Europe as countries grapple with how to handle the arrival of the thousands fleeing war, persecution, and chaos that reigns in the besieged country. The European block is trying to divvy up quotas of Afghan immigrants. Turkey has already warned Europe that it will not be their “refugee warehouse,” and similar to Greece, it has built a wall to thwart asylum seekers.

The outpouring of emigrants impacts the geographically distant United States to a lesser degree, but it is still expected to pay a heavy price for its messy withdrawal and to absorb thousands of Afghan refugees. This poses an additional challenge to their current migration crisis on its border with Mexico.

The scenes of Afghans desperately trying to escape are saddening, distressing, and disturbing, but history has taught us one thing about mass migration policies. Absorbing entire nations of people is not a realistic solution, and most definitely not a wise one in the long term. We have never seen good results throughout generations of dealing with these situations.

This is especially the case when bringing peoples with different religions, cultures, and behaviors in among other societies, particularly without any preparation on either side. It is like smoldering coals that aren’t entirely extinguished that will readily reignite a raging flame under the right conditions.

One may ask, do Europeans or Americans have a moral responsibility to accept every refugee after they withdrew military support in Afghanistan leaving the country in the hands of extremists?

Europeans or Americans should not take responsibility for people who have no intention of integrating into their culture and become like locals upon their arrival. Already today those who travel to Europe find it completely different after previous massive waves of immigration.

A more humane and correct solution would be to rehabilitate the affected peoples, help them, but in their place, in their home. But since terrorism has taken over their country, it is the mandate of international organizations such as the United Nations and its affiliates to fully support those struggling with adverse conditions to survive.

Every people has a place on earth where they belong, where they share a common culture, religion, and values. A place where they should have the necessary means and conditions to settle down and live safely. Simply opening the doors and letting an influx of immigrants in will not solve any problem. It only creates new ones of huge proportions, including opening the doors for radicalized Islamic elements to infiltrate along with those genuinely looking for shelter.

The goal in every society is for individuals to mix with each other and merge, but not artificially. The liberal approach which believes that it is possible to assimilate every immigrant through broad-mindedness is wrong. It is a recipe for increasing agitation unless a proper absorption and integration process is found.

An effective integration would necessitate an in-depth educational process in which every individual would be taught how to unite on a common ground above their differences.

Only after each nation has sat in its place and learned the laws of nature, which is round and integral, where every part is naturally linked to the rest of the system and works in harmony, then we will rise above differences. The merging should begin in spirit, in the shared values of loving others. Only then can we live with each other and not feel differences between us.
[286649]

“Migration Is No Solution” (Linkedin)

Through Whom Do The Laws Of Governance Pass?
Podcast Powered by podPress (v8.8)