“Migration Is No Solution” (Linkedin)

My new article on Linkedin “Migration Is No Solution” 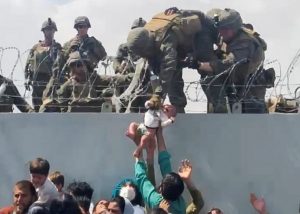 A heart-rending picture of a baby being handed over from its parents to US troops (but has since been reunited with its father), Airbnb offering to house 20,000 Afghan refugees at no charge, Europe fearing another wave of migration from a Muslim country, and the US debating if and how many Afghan refugees it should take in, all these point to our misunderstanding of ethnicity, culture, and faith. Instead of pondering what to do with refugees, we should plan and carry out programs to help indigenous people thrive in their indigenous countries and in their indigenous culture and faith.

We can already see that the migration of millions of Muslims into Europe was not good for Europeans. There is no integration between the cultures, no desire to learn from one another, and the migrants have no wish to merge in their new environment, but to build their old countries in their new ones, ignoring the wants of their hosts, and often patronizing them as though they were entitled to rein the land.

This forced encounter of civilizations creates nothing but clashes that produce distrust and hatred. I am all for brotherhood among all people; I think it is a must, especially today, and I think that achieving it will solve all our problems. But there is a right way to cultivate brotherhood, and there is a wrong way, and right now, we are wholly on the wrong way.

What we are doing is forced integration, and this will never work. Each country and each nation has its own indigenous place on Earth. On its own land, each nation should cultivate its culture and live by it.

The international community should assist nations that need it to thrive in their own place, not transfer them to countries where they will be foreigners, where they will disrupt the lives of the locals, and struggle to maintain their own traditions. That would only make everyone miserable. Once we have achieved stability, where each nation sits under its own vine and under its own fig tree, so to speak, we can begin to gradually and thoughtfully integrate them.

If we want to avoid such distressing images of which we have seen too many in the past several years, we should change our mindset from encouraging migration to cultivating respect for all indigenous cultures and faiths. We will all benefit from the increased and solidified diversity, as long as we do it on the basis of respect and brotherhood among all people.

“In A Gloomy World, There Is A Way Out” (Linkedin)