My new article on Linkedin “Erasing the (Inner) Distance” 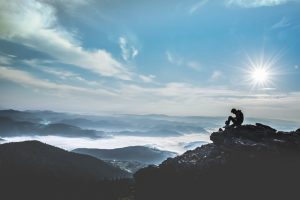 As Jews around the world are preparing for Passover, which celebrates the exodus of the ancient Israelites from enslavement in Egypt, it seems as though the entire world is experiencing somewhat of a “global Egypt.” While Covid didn’t exactly enslave us, it certainly did restrain us. But more importantly, the way to escape Covid is the same way by which the Hebrews escaped Egypt.

Today, humanity is in a similar situation. The story of Egypt should serve as an allegory for us. If humanity chooses the same instrument that the ancient Hebrews did, namely unity, we, too, will be redeemed from the shackles of Covid, and indeed from all the adversities that have landed on us in the past century or so, and that are destined to land on us if we do not choose unity.

After Joseph, who was both the leader of the Hebrews and Pharaoh’s viceroy, died in Egypt, the state of the Jews continually deteriorated. They became dispersed and disintegrated, and wanted to mingle among the Egyptians. “Let us be as the Egyptians,” they said (Midrash Rabbah, Shemot). The Egyptians, in turn, who until then were very fond of the Hebrews, became increasingly hostile toward them. The Midrash continues to tell us about it: “Because of [their dispersion], the Lord turned the love that the Egyptians loved them into hatred.”

In the end, the Israelites found themselves separated, hated, and abused by their previously friendly hosts. They remained that way until Moses, who was both a Hebrew and the prince of Egypt, and grew up as Pharaoh’s adopted grandson, returned to his Hebrew roots and began to fight for his people. His struggle was tough. He had to fight not only against Pharaoh, but also against his own people, who did not want to unite under his leadership.

But once they agreed to start working on their unity, they were liberated from Egypt, fled to the desert, and eventually solidified their bond to such an extent that they achieved an unprecedented level of unity, which made them “as one man with one heart,” as the great 11th century commentary RASHI put it.

Today, humanity is in a similar situation. The story of Egypt should serve as an allegory for us. If humanity chooses the same instrument that the ancient Hebrews did, namely unity, we, too, will be redeemed from the shackles of Covid, and indeed from all the adversities that have landed on us in the past century or so, and that are destined to land on us if we do not choose unity.

While our world has become increasingly interconnected, our hearts have become increasingly disconnected from each other. Alienation and narcissism are pushing us apart and pollute our relationships much more than fossil fuels are polluting the planet. Our self-absorption has become so noxious and so antisocial that it became necessary to separate us from one another altogether. This is when Covid entered our world, forcing a global closure on all of humanity, but mainly on the developed, most self-centered parts of the world, namely the US, Western Europe, and China.

We should have used the timeout from excessive consumerism, exploitation, and mutual abuse to bring our hearts closer, similar to what the Israelites did in Egypt, once they were afflicted as a result of their own social disintegration. We didn’t do it. Instead, we waited for vaccines to be developed and yearned for the moment when we could resume our toxic living. Now we have vaccines, but we will not be able to resume our pre-Covid days. Since we did not work on bringing our hearts closer, our hearts only grew further apart. When we try to resume our former way of life, we will discover that we simply do not enjoy it anymore.

In the absence of pleasures in life, people’s depression will intensify and extremism will flourish in myriad ways. Humanity is going to reveal the worst of human nature, until it says “Enough!” and resolves to erase the inner distance among everyone, and build a united humanity.

Just as the consent of the ancient Israelites to work on their unity was enough to deliver them from Egypt, humanity’s consent to work on unity among all people is enough to deliver us from Covid, and from any adversity that is currently afflicting us. As long as we remain on the path of unity and keep improving it, we will go from strength to strength. If we revert to alienation, the plagues will return.

For the first time in history, we have a clear work plan, a path out of misery for all of humanity: Try to connect and you will succeed. Abandon connection, and you will suffer. This is what we will discover if we only begin to work on erasing the distance in our hearts.

“Will WW3 Start Because The Tensions Of Israel And Iran?” (Quora)

“Was Pharaoh Of Passover Really A Bad Guy Or Just A Victim Of His Royal Birth? He Was No Haman.” (Quora)
Podcast Powered by podPress (v8.8)