“The Root Of Israel Will Give Israel No Peace” (Linkedin) 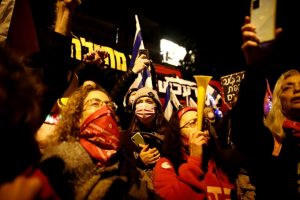 Prof. Ran Blitzer, head of Israel’s Experts Cabinet appointed to fight Covid-19, has stated that the closure isn’t working anymore. Vaccines are effective, he said, but we are still seeing high infection rates. Alongside the battle with the virus, Israel is grappled in yet another vitriolic general elections campaign, which makes many of the Covid related decisions made by policymakers politically motivated, at the expense of the public’s health. The overall sensation among many Israelis is that there is chaos and disorientation because of the political mayhem, where politicians are battling each other instead of the virus.

The crises may seem unrelated, and each country is dealing with its problems on its own, but the truth is that everything is connected. Even worse, on a deeper level, everything is connected to Israel. And now that the American saga has calmed down a little, the world will turn its attention to Israel and the Jews, and not in order to compliment us on our achievement in vaccinating the Israeli population so quickly.

But chaos isn’t taking over only in Israel. Social, political, and medical crises are occurring the world over. The news may have focused more on the US since last summer due to the growing racial and political tensions that turned violent there, but Europe has been entangled with persistent violent political and Covid related riots, as has Russia, Myanmar, with its military coup, and many other countries. Even where there seems to be relative calm, such as in China, it is only a facade. Everyone is suffering from the global economic slowdown, the repeated closures, and the unnerving sense that humanity has no leaders, that everyone is at a loss.

The crises may seem unrelated, and each country is dealing with its problems on its own, but the truth is that everything is connected. Even worse, on a deeper level, everything is connected to Israel. And now that the American saga has calmed down a little, the world will turn its attention to Israel and the Jews, and not in order to compliment us on our achievement in vaccinating the Israeli population so quickly.

We must understand once and for all why the world never stops blaming Israel for its woes, and why it feels that Israel owes it something. The root of the people of Israel is not in some remote tribe in ancient Mesopotamia. Israel coalesced into a nation after many people from many tribes and nations joined together under Abraham’s leadership since they believed in his tenet that mercy and love of others are the keys to happiness. Those people, who had nothing in common, developed a unique bond that was based on an ideology of unity above enmity rather than on familiar or tribal affinity. Because those strangers had to overcome profound initial distrust and hatred, the bond they forged had to be equally strong. As a result, the bond they formed was like no other, and it lifted Israel to heights that had never existed before. That bond, forged by transcending intense enmity, became a role model for the nations, a proof that we can bridge any rancor and resolve any conflict, if we only exalt unity high enough.

Today, when disarray and disunion plague every corner of the globe, the world will turn to Israel even more quickly than before. Israel, which once managed to unite sworn enemies under the idea that unity is the supreme value, is now failing the world. We have turned our most sacred values of “mutual responsibility” and “love of others” into mere lip-service, election slogans that no one means and no one believes. Yet, these values are exactly what the world needs, we are the ones who once achieved it, and because the world feels connected to us, it demands this from us. It demands that we restore our unity and spread it, share the secret of uniting above hatred.

In the meantime, we, who have abandoned our unity, have become the distrusting people we were before we came to Abraham and discovered the value of unity. We want to rejoin the nations of the world, but they will not let us. They will only accept one thing from us: that we become Israel once more. They don’t need us to be like them; they need us to be Israel—people who rise above their hatred and unite, and thereby set an example that today is the only thing that can save the world from misery.
[277973]

The Greatness Of The Creator In The Ten