“Italy Turns Right, but Is It Right for Europe?” (Linkedin)

My new article on Linkedin “Italy Turns Right, but Is It Right for Europe?” 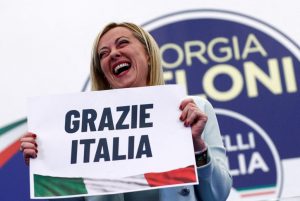 “The right-wing alliance that won Italy’s national election will usher in a rare era of political stability to tackle an array of problems besieging the euro zone’s third largest economy, one of its senior figures said on Monday.” This is how Reuters began its report on the general election in Italy this week, where Giorgia Meloni, leader of the Brothers of Italy party, has won by a substantial margin that will allow her to lead Italy’s “most right-wing government since World War Two.” Europe and the US are concerned, and so should the Jews be, despite Meloni’s evident support of Israel.

I believe that Meloni’s approach is not extremist. I would say that it is rather quite settled, especially since she is a woman; a woman leader is preferable to a man leader.

That said, history proves that the trend of intensifying nationalism has an explosive potential. The trend is not exclusive to Italy; it is spreading through all of Europe, Russia, and can potentially reach the Middle-East, with its fanatic orthodox regimes.

The consequences of this process can potentially lead to another world war. In fact, we are already on the verge of it. At the moment, I see no desire to mitigate the growing isolationism. On the contrary, each country is ramping up its complaints against the Eurozone. Italy, Hungary, Romania, and other countries that were part of the Soviet Union are still in disarray, and free speech and democracy have not been properly established there. Therefore, for the time being, a borderless Europe is unrealistic and the union is teetering.

By and large, the strengthening of the Right is not necessarily bad. Focusing more on national unity can help establish order in countries. However, the balance is very delicate, and a regime can slip into extreme fascism.

Italy’s fascism during World War II, by the way, was not inherently extremist, so I am not sure that Italy is in danger of finding itself under a fascist tyrant. I am not so certain about other countries, though, as some countries in Europe will merrily jump into fascism in its more aggressive form.

However, it is not too late; we can climb out of the slope if Europe is aware of the dangers of extreme nationalism and chooses unity, sincere unity, instead of isolationism. I do not think that such a shift in mindset can be done so easily or quickly, but if Europe never starts, it will certainly never achieve it, and if it does not achieve it, the European Union will dissolve, possibly very violently.

As for the Jews, the situation is precarious. As during any crisis, the Jews are bound to be targeted when things go awry. Despite Meloni’s favorable approach toward Israel, any adverse developments impact the Jews negatively. It might happen through fascism, communism, or socialism, but it matters very little; when things go wrong, the Jews suffer.

Nevertheless, unlike other nations, the Jews determine their own fate. If we unite, no harm will come to us. If we remain divided as we are today, harm will find us no matter what we do. Our stipulation is very clear: If we hate each other, the world hates us. If we embrace each other, the world embraces us. Our sages have stressed this point throughout the ages, and history itself shows that the correlation between our concern for each other and the world’s relation toward us is undeniable and immutable.*

* For more on this topic read my book The Jewish Choice: Unity or Anti-Semitism, and my latest publication: New Antisemitism: Mutation of a Long-lived Hatred.

“Will AI replace teachers in the future?” (Quora)

“Always with Me” (Times of Israel)
Podcast Powered by podPress (v8.8)