“A Weekend Of Worldwide Unity” (Linkedin)

My new article on Linkedin “A Weekend of Worldwide Unity” 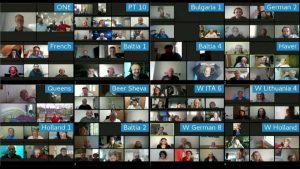 This past weekend, my students from around the world convened online for a weekend of profound unity and love. Transcending distance, culture, faith, ethnicity, and gender, they gathered in sessions and workshops, meals and celebrations, and rejoiced in their shared desire to bond. More than 6,000 students convened on the platform they have built themselves, and which they named Arvut (mutual responsibility). They spoke in dozens of languages, all with simultaneous interpretation, and talked of nothing but love and responsibility for one another.

Unity will determine the fate of the world. If we establish it, we will reverse the trajectory of enmity, aggression, and violence. If we shun it, the world will plunge into another war.

This weekend, we discovered once again that when there is a will to unite, there is always a way. The differences did not divide us. On the contrary, they brought us that much closer.

As a teacher, my greatest joy is to see my students accomplish themselves. This weekend, I was given a demonstration that my students have accomplished a great deal.

Indeed, this convention was the most powerful, intense, and serious of all the conventions thus far. My students proved that they are willing to fight for the unity of the world, to rise above their own ego, unite, and share that unity with the entire world.

There is nothing that the world needs more than unity. Accordingly, there is no greater gift that we can give to our fellow human beings than our unity and the invitation to join in.

Unity will determine the fate of the world. If we establish it, we will reverse the trajectory of enmity, aggression, and violence. If we shun it, the world will plunge into another war.

Great transformations lie ahead, whose nature depends on the degree of our unity. I hope and pray that humanity will join the unity we have achieved this past weekend, and raise itself from the nadir of abhorrence to the zenith of love of others.