“The Discordant Drums Of War” (Linkedin)

My new article on Linkedin “The Discordant Drums of War” 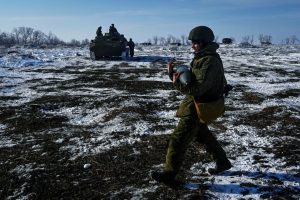 As the world waits with bated breath to see if Russia will invade Ukraine, as thousands of American troops are on high alert to invade Eastern Europe, and as NATO announces it will send more ships and fighter jets to Ukraine to reinforce the Baltic states, I am convinced we are not on the brink of a world war.

Invading Ukraine is not worth it for Russia because such a move could lead to a war that the Russians will undoubtedly lose. They will probably succeed here and there militarily, even if their army is not as strong as in the past, but financially they will lose. Russia’s economy is weak anyway, and life there is difficult. The war would only crush them.

In today’s modern world, it is no longer worth fighting. What is the point? More money and natural resources? After all, the investment in conflict is greater than the profit, not to mention the subsequent participation which will cost a fortune. Nowadays it is more beneficial to enter into economic cooperation, as initiated by the European Union—to arrange industrial and cultural relations, to engage in economic activities and trade, and thus all countries joining the alliance will benefit from joint business.

So what will enable Russia to conquer more territory and control it? After all, it has vast superfluous territories stretching from the Volga River to the Far East where there are hardly any inhabitants. It follows that the Russians’ move is based not on practical thinking but on a private compulsion, on the need to conquer and feel, “This is ours!” Russia enjoys showing the world that it is a strong country. This Russian pride is well-known, a familiar characteristic that can spur it to go barefoot, eat gravel, as long as it wins respect and sympathy.

Moreover, Ukrainians are strong, full of resentment against Russians, which gives them the strength to oppose them. If this is so, where do the winds of war come from? First of all, from the media which profit from the heating up. Second, from people whose job is to fuel war. Opinion makers and political analysts know that conflict is their art, and they know how to recruit the minority dissatisfied with the existing state into their ranks, thus igniting an uproar at any hour. Third, it is the politicians who, in the event of an escalation or a real war, count on raising their prestige in the eyes of the population. The possibility of war is on everyone’s lips while U.S. President Joe Biden’s approval rating continues to drop, according to recent polls. 72% of Americans believe their country is moving in the “wrong direction,” revealed a NBC poll a few days ago.

Despite the fierce winds, I do not think Europe is on the brink of war. Even if a few missiles fall here and there, the current crisis will ultimately be resolved diplomatically, not militarily. A good agreement will be signed for all countries involved: Russia, Ukraine and, of course, the U.S., which always emerges stronger and more successful.

It is good that Israel is out of the Russia-Ukraine mess. Countries that do not enter into conflicts will form a solid and correct foundation for a better existence, especially Israel, whose role is to be the pioneer force for a new, more balanced and stable world.

We Jews who are watching from a distance what is happening there, must engage in resolving the wars between us, repairing the relationship within our people so that we can set an example of a true and qualitative cordial connection out of a great desire to play the drums of peace. That is the essence and mandate for the people of Israel to implement, to become the “light unto the nations” for the benefit of all the peoples in the world.
[293264]

“On The Difference Between Unity And A Show Of Unity” (Times Of Israel)
Podcast Powered by podPress (v8.8)