“Volcanic Eruptions Are Corrections, Too” (Linkedin)

My new article on Linkedin “Volcanic Eruptions Are Corrections, Too” 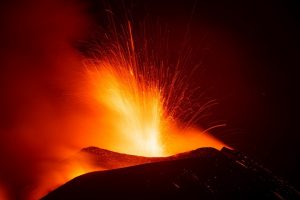 For several weeks now, there has been a series of seismic events in and around the Mediterranean Sea. First, Mt. Athena in Italy erupted. Next, a series of earthquakes struck Crete; and currently, Mt. Cumbre Vieja has erupted a little farther south, on the Spanish island of La Palma off the coast of Morocco. Nothing happens without a reason. If we know that reality is moving toward balance, then these events are on the way toward it, too. What we need to learn is how to achieve balance without going through upheavals and disasters on the way to peace.

Biologists call it “homeostasis”; physicists call it entropy, or a “state of thermodynamic equilibrium.” Either way, nature’s final, healthy state is balance, harmony. Volcanic eruptions, earthquakes, massive storms, and other menaces indicate nature’s level of imbalance. These are the valves through which nature releases excess pressure on the various levels of nature. The more intense the pressure, the more intense the natural disaster.

When we look around us for the cause of nature’s growing pressure, we will not find it. It seems to erupt for no reason. In the past, humans thought that to appease the gods, i.e. nature, they must sacrifice other human beings, sometimes even children. When they became more “civilized,” they started sacrificing animals, then plants, until man has abandoned sacrifices altogether. But nature’s wrath is still very much a part of our lives.

The thing is that there is a reason for nature’s apparent fury, which today we know is imbalance, and there is something that we need to sacrifice in order to “appease” nature. However, that something is not outside of us, but within us: It is our own ego, our self-centered nature, which is engraved in us at birth.

Currently, we worship our ego. We cater to its whims and wish nothing but to satisfy it.

Yet, if we keep worshipping it, we will destroy our planet and destroy ourselves in the process. The only way to secure a good life for everyone is to think of everyone rather than only of ourselves.

If we start cultivating more inclusive thought patterns, more caring and mutual responsibility, we will change our lives dramatically. The only element that is out of balance with the rest of nature will disappear, nature’s wrath will subside, and peace will reign supreme.
[288037]

“Can Anybody Destroy His Desire?” (Quora)