My new article on Linkedin “Germany-Israel Relations after Merkel” 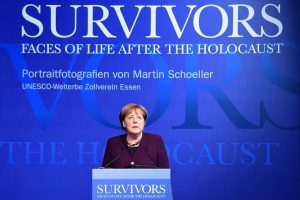 After her 16-year term as Chancellor of Germany, Angela Merkel’s farewell visit to Israel on Sunday could mark a change in the friendly relationship between the two countries. Whether that change will be positive or negative depends solely on the Jewish nation. Our unity determines the state of the world, its fate, and the way we are treated by others.

Olaf Scholz, the leader of the center-left Social Democratic Party, narrowly won the majority of votes against the ruling center-right Christian Democrats (CDU/CSU). It appears that he will soon be able to form a coalition with the Greens and liberals to replace Merkel.

The new government’s foreign policy towards Israel remains to be seen, but its most immediate headache is to deal with matters at home. Police registered 2,351 cases of antisemitic offenses last year, an increase of 15% compared to the previous year, the highest number on record since 2001. Most recently, German authorities thwarted a potential terrorist attack on a synagogue in the town of Hagen. Just days ago, another incident caused an international uproar. A German Jewish musician claims he was denied check-in service at a Leipzig hotel unless he concealed his necklace bearing a Star of David.

So what change can we expect in the near future? For a positive answer to that question, we can only look to the people of Israel to understand that it dictates the course of history and to carry out this responsibility correctly.

Whether aware or not, the ball is in our court. Through our unity, we allow unity in the world as we stream into it the positive uniting force it so desperately needs. Conversely, our separation denies humanity this power and invokes within it hatred toward Jews.

In the words of Rav Kook, “The genuine movement of the Israeli soul at its grandest is expressed only by its sacred, eternal force, which flaws within its spirit. It is that which has made it, is making it, and will make it still a nation that stands as a light unto nations, as redemption and salvation to the entire world for its own specific purpose, and for the global purposes, which are interlinked.” (Letters of the RAAIAH 3)

Today’s hostility toward Jews must remind us of our task. Only if we rekindle the brotherly love we cultivated centuries ago and share the method for achieving this with all, will we be able to stop antisemitism.

Which way the scales tip is in our hands. In his essay Mutual Guarantee, Baal HaSulam writes, “The Israeli nation was established as a conduit to the extent that they purify themselves [from egoism], they pass on their power to the rest of the nations.” Jewish unity tips the scales toward pleasant relations and the power of peace flows into the world. Conversely, our separation blocks this flow to humanity and invokes hatred of Jews with its absence.

Therefore, neither Chancellor Angela Merkel nor her successor will determine the acceptance or rejection of the people of Israel. Neither will any other determine whether, God forbid, Germany will eventually be governed by a tyrant like Hitler. No political figure can determine our fate. Everything depends on how we Jews behave toward one another, on our capacity to connect, thus unleashing the positive force of nature upon us and all humanity. Then we will fear nothing, no electoral outcome or other occurrence in any part of the world because hatred will be replaced by peace and quiet for everyone.
[288450]

“The “Opinion” Of Kamala Harris Isn’t Really Hers” (Linkedin)

“The Pandora Papers Will Not Make The World A Better Place” (Linkedin)
Podcast Powered by podPress (v8.8)