“76 Years After Its Founding, The UN Has Yet To Achieve Anything” (Linkedin)

My new article on Linkedin “76 Years After Its Founding, the UN Has Yet to Achieve Anything” 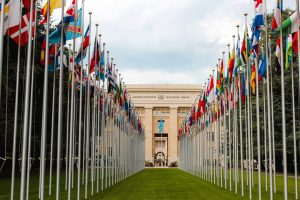 “United Nations Day, on 24 October, marks the anniversary of the day in 1945 when the UN Charter entered into force,” writes the UN page dedicated to this date. The title of the page reads “Building Back Together for Peace and Prosperity,” and states that the anniversary “offers the opportunity to amplify our common agenda and reaffirm the purposes and principles of the UN Charter.” For 76 years, the UN has been trying to bring peace to the world. In 76 years, we have not moved one inch closer to it. If I had to summarize the operations of the UN during the entirety of its time, I would capture it in four short words: a waste of time.

I cannot say it hasn’t tried. During the earlier years of the previous decade, I myself had dealt with the UN extensively. I met several times with then director general of UNESCO, Irina Bokova and we sought ways to mitigate some of the world’s most pressing issues. I had a wonderful meeting with the former Deputy Secretary-General of the United Nations, Dr. Asha-Rose Migiro, after which an organization that I am heading, ARI Institute, collaborated with the UN, which declared that the topic for 2012 would be “education.” Together, we designed an international educational program for establishing unity and camaraderie in society and in schools.

If the UN is to be an effective institution, it must be above any particular interest of any single country. Its sole interest must be for all of humanity to unite, and it must be given the power and authority to carry out its task.
Sadly, the meetings and efforts did not result in changes on the ground. They failed not for lack of competence or good will, but because the UN is not intended to succeed. It is not intended to make the world a better place, but to serve as an arena for international political manipulations and power struggles under the guise of concern for human rights, food and water problems, and climate change.

Its intentions may have been good when it was first established, but once politicians took over and pushed their own agenda, they warped and distorted everything. By doing so, they had turned an institution that could have been very meaningful and positive in humanity into a stage for making empty speeches and sanctimonious declarations. This is why I said that its activity has been a waste of time.

If the UN is to be an effective institution, it must be above any particular interest of any single country. Its sole interest must be for all of humanity to unite, and it must be given the power and authority to carry out its task.

Currently, no one in the UN is accountable. If the intended agenda does not happen, no one pays for it; no one is held responsible. This is why no one takes it seriously.

For this reason, I think that the UN, as such, should be dismantled completely. Instead of it, there must be an international educational institute dealing with installing the realization that we are all dependent on each other. Before we realize that when we pollute one part of the world, we are polluting our own backyard, nothing good will happen.

Countries must learn that they have to support one another despite their mutual enmity. Unless we rise above vindictiveness and begin to build a common, global entity called “humanity,” humankind will suffer the consequences of its disunion.

We can learn that we are connected in one of two ways: a good way or a bad way. The bad way is the one we’re on today, and we can see where it is leading. The good way is our only option since this is the only way where we come out alive on the other end of it.

In conclusion, I hope that this birthday was one of reckoning for the UN, that heads of states are beginning to realize that if we want to celebrate more birthdays, and we want our children to celebrate them, we need to change course. Once we learn how to feel close to one another, it will be possible to build a United Nations that will warrant its name.