“What Poland Knows About Israel That Israel Doesn’t)” (Linkedin) 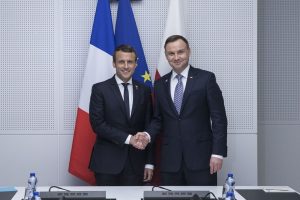 There is going to be a lot of fallout from the retreat of the US Army from Afghanistan. The Chinese have already sent a stern message to Taiwan that “it could face the same fate as Afghanistan if it continued relying on the United States as an ally.”

But the message that the United States hurried withdrawal sends to Israel is even more forbidding: Israel has no one to rely on. Already, Israel is isolated in the international arena. Now, with the rise of another Islamic emirate, and the US’s declining credibility in the eyes of its allies, Israel should know that its future is very bleak if it intends to rely on Uncle Sam for support. It is still there, but it is waning fast.

A good example of Israel’s declining international status is its recent altercation with Poland over the anti-restitution law that the Polish government has passed. The law exempts Poland from assuming responsibility for its part in the killing of Jews during World War II, and therefore from financial restitution.

Israel, who sought support from its only remaining ally, the US, got the following indeterminate response from Secretary of State Blinken: “The United States reiterates our concerns about amendments to the Code of Administrative Procedure….severely restricting restitution and compensation for property wrongfully confiscated during Poland’s communist era. Further,” adds Blinken “we urge the Polish government to consult with representatives of affected parties [omitting their identity] and to develop a clear, efficient, and effective legal procedure to resolve confiscated property claims.”

As if that message was not thinned enough, Blinken went on to commend Poland’s president Andrezj Duda’s statement supporting “freedom of expression, the sanctity of contracts, and the shared values that underpin our relationship.” Indeed, we are alone. Poland knows it, and now the world knows it. It remains to be seen whether we know it, too.

Clearly, our only hope is our unity. If we have not realized it, our growing isolation will leave us no choice but to acknowledge it. And if our unity does not seem like much to lean on, it will soon be our only option, so we’d better begin to buttress our solidarity.

Inner cohesion is not new to our people; it has been our “secret weapon” since the inception of our nation. In fact, it is our legacy, the one thing we have committed to pass on to the nations, and the one thing we haven’t passed on to them for the past two millennia, since we succumbed to inner hatred and division and became the world’s pariahs.

Had we been united, our sages say, no misfortune would have come to us. “The prime defense against calamity is love and unity,” states the book Maor VaShemesh (Light and Sun). “When there are love, unity, and friendship between each other in Israel,” the book continues, “no calamity can come over them. … [If] there is bonding among them, and no separation of hearts, they have peace and quiet … and all the curses and suffering are removed by that [unity].” Similarly, the book Maor Eynaim (Light of the Eyes) stresses, “When one includes oneself with all of Israel and unity is made … at that time, no harm shall come to you.” Likewise, the book Shem MiShmuel (A Name Out of Samuel) adds, “When [Israel] are as one man with one heart, they are as a fortified wall against the forces of evil.”

The Polish people know that we are isolated. Their overt contempt for us proves it. If we stop looking for the world’s approval and begin to nurture our internal union, no one will deride us. Union is the only thing that the world does not have. It is also the only thing that we can develop and that everyone will want from us. If we establish it, not only will we stop being isolated, we will be welcome everywhere since we will realize our ancient vocation to be a light of unity unto nations.

For more on this topic, refer to the book The Jewish Choice: Unity or Anti-Semitism, Historical facts on anti-Semitism as a reflection of Jewish social discord.

Must A Kabbalah Student Have A Family?

“What Were The Justifications Of Barcelona FC To Insist On Playing Against Beitar Jerusalem, Not In Jerusalem?” (Quora)
Podcast Powered by podPress (v8.8)