“The Spiritual Reason That I Took The Third Shot” (Linkedin) 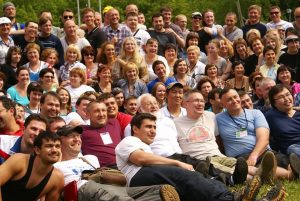 A little while ago, I received an invitation from the Ministry of Health to go to a certain vaccination center in my country, Israel, to get my third shot. I stood in line for maybe half an hour before my turn came up, but once I was inside, the whole thing was over in less than a minute. I was told to wait for 10-20 minutes after the shot to make sure I had no side effects but admittedly, I didn’t have the patience. I felt just fine, just a little tired from standing outside for half an hour, so I went straight back to the office to get ready for the daily shows.

We can only blame ourselves for the fourth wave that’s raging now in Israel. Had we been more united, this wouldn’t have happened. From the spiritual perspective, the virus isn’t a medical problem, but a test to our union, and we are failing it. The rule in spirituality is that if we work together, we will be safe, since our unity makes us equal to the unified force that creates life. In the wisdom of Kabbalah, it is called “I dwell among my own people.”

RABASH, my teacher, had taught me by example and in words that we should obey what the doctors say. If there are disputes, he follows the government’s directive. This, to him, was the meaning of dwelling among his people. RABASH didn’t immerse himself in the intricacies of the medications he was given; he knew he had to follow the doctor’s orders because it was the right thing to do in the spiritual sense.

Like him, I don’t get into the question of whether the vaccine works or not, whether there are ulterior motives behind it or not, or into any other question. All I know is that the Israeli government has recommended that anyone over 60 be vaccinated, and it summoned me to go and do it on a certain day at a certain place. Therefore, I do it, to be among my people, the people of Israel.

To me, it is an expression of my desire to unite with my people. Had we all had the desire to unite, we wouldn’t have come to this; we would have eliminated the virus. It is a test that we are failing every single day. As long as we keep failing, the virus will keep spreading, and no vaccine, medication, or any other measure will help.

If we don’t learn to unite through the virus, another blow will come, more sinister and aggressive than Covid. If we don’t learn from the second blow, a third one will land on us, worse than the former two. When we learn that our only remedy is unity, to choose togetherness over everything and anything else, our troubles will stop.
[285952]

“No One (Really) Wants To End Antisemitism” (Times Of Israel)