“Being An Environmentalist Pays Well” (Linkedin)

My new article on Linkedin “Being an Environmentalist Pays Well” 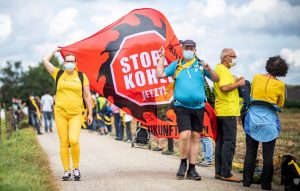 A recently released report by the Intergovernmental Panel for Climate Change (IPCC) states that “Human influence has warmed the climate at a rate that is unprecedented in at least the last 2000 years. … Human-induced climate change,” the report asserts, “is already affecting many weather and climate extremes in every region across the globe. Evidence of observed changes in extremes such as heatwaves, heavy precipitation, droughts, and tropical cyclones, and, in particular, their attribution to human influence, has strengthened since [the last report in 2013].”

This summer, there is not a region in the world that has not suffered because of the changing climate. According to the IPCC scientists, the horrible future they have been predicting is already happening, and from here on, it will be all downhill unless we do as they say.

With all due respect, I think that cutting emissions, switching to renewable energy sources, prohibiting the use of plastic, and all the measures that the distinguished panel is suggesting will not improve our situation one bit. It will only create well-paying jobs for people who make a career out of telling us off. It is not even a matter of the panel’s inability to impose its suggestions on countries. It is that the remedy they are prescribing is the wrong remedy since their diagnosis is wrong from the very beginning.

We can test their suggestions—burn less fossil fuels, produce less plastic and so forth—but by the time we recognize the futility of their ideas, we will be much worse off than we are today, and things are already quite dire. Instead of wasting time, resources, and lives, we should work on the only element that we know is malfunctioning: people, or more precisely, relationships among people. Even if we do not see the connection between the exploitative nature of our relationships, our exploitation of nature, and the growing instability of the climate, it is still worth trying to experiment with connection because 1) it will improve our relationships, which is a definite plus, and 2) we haven’t found another remedy. In fact, we are so uncaring that we cannot bring ourselves to experiment with restraining the use of fossil fuels. Since we insist on over-consumption, environmentalists suggest we use renewable energy sources. But this is completely useless.

Also, we already see that our planet is a single system where everything affects everything else. We also see that everything is balanced in nature and runs in its course, except for us. In other words, we understand that the problem lies only with us. Now we need to understand the depth of the problem—that it isn’t that we are burning the wrong kind of fuel, but that we are injecting our volatile temper into the system that sustains us: Planet Earth.

Nothing in nature fights. Animals hunt or struggle over prominence in order to reproduce. But once an animal has eaten and is not in the midst of mating season, it is quiet and peaceful. Conversely, we are ever belligerent, always looking for the next peak to climb, and the next climber to throw off the mountain on our way to the top. Since our species is at the top of the pyramid, our negative mode of thinking spoils all other levels of nature and upsets their balanced and harmonious existence. Succinctly: Every problem—from climate catastrophes through earthquakes, to plagues and wars—stems from the corrupt human nature. Fix humanity, and you have fixed the world.

By fixing, I mean fixing our relationships. If we change our attitudes toward each other from hostile to caring, we will change the whole of society. Instead of wishing to exploit others, we will seek to support them. Instead of wishing for other people’s failure, we will wish for their success, and they for ours.

Because of our positive relation toward each other, we will stop depleting natural resources since that would be unfair to other people and to future generations. Likewise, we will not want to extinguish wildlife, cut down forests, pollute the air, water, and soil because these would be detrimental to others. Soon, we will realize that we want to use only what we really need and dedicate the rest of our time and energy to supporting, encouraging, and nurturing others. In this way, by caring for each other, we will heal society and restore the balance in the climate and the soil.

Admittedly, caring for others does not pay well to those who make “fighting” climate change their career. They will tell us that we should look elsewhere for solutions, and not at our relationships, but they will be wrong and misleading. If we want a good future, we should insist on caring for each other’s future, and then our own will be secured, as well.

“Are Cities The Future?” (Quora)