“Which Human Activity Causes The Most Harmful Change In The Natural Environment?” (Quora)

Michael Laitman, On Quora: “Which human activity causes the most harmful change in the natural environment?“

Nature, which includes humanity, is a single, integral and closed system.

Humans hold the highest level in nature, i.e., out of the four levels, still, vegetative, animate and human. We are the highest level, because we have the innermost influence on nature, not just physically and mechanically, for instance, with the development of our technologies, but also mentally and emotionally.

As such, while it might appear that our technological and industrial activity causes the most harm to the natural environment, what really causes the most harm are our negative attitudes to each other. The hatred that exists on the human level—which does not exist on nature’s other levels—corrupts nature. On one hand, we are in a closed, interconnected and interdependent system, and on the other hand, our negative attitudes toward each other in such a system negatively affect all kinds of connections between us and nature. 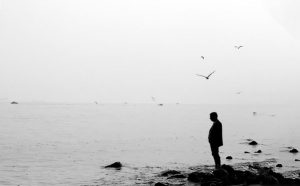 What we need to understand is that we exist in a field of thoughts and desires. Beyond the physical forces that we see and feel with our senses, we increasingly discover that there are deeper forces at work. For instance, we once lived in periods where we did not know that electricity, radio waves and atomic energy existed, but we eventually discovered these forces.

We are coming closer to the threshold of discovering that our negative thoughts, desires and attitudes toward each other harm nature more than any physical activity that we conduct, for instance, more than chopping down trees or burning fossil fuels, as we commonly think about it. Also, the most harmful thoughts and desires toward our natural environment are those where we wish to harm each other. If we focus on correcting our thoughts, desires and attitudes toward each other, we would likewise discover a favorable response from nature—we would see how all kinds of phenomena that we perceive as negative, such as natural disasters, would decrease the more that we engage in shifting our attitudes to each other from negative to positive, egoistic to altruistic and hateful to loving.

The Mind—A Link To Universal Consciousness

“A Letter To A Viewer Who Discovered That Everything Is A Lie” (Medium)
Podcast Powered by podPress (v8.8)