“The Jewish People Are About Quality, Not Quantity” (Linkedin)

My new article on Linkedin “The Jewish People Are About Quality, Not Quantity” 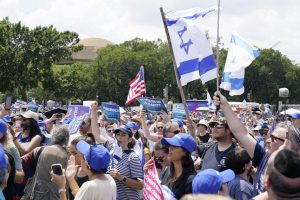 The Jewish people are growing. A comprehensive study conducted by researchers at the Hebrew University and recently published by the Jewish Agency reveals that despite antisemitism and other threats, the Jewish population worldwide has increased from 15.1 million last year to 15.2 million Jews today. However, the rise in the number of Jews does not represent a sign of higher strength. The potential of the people of Israel lies not in matter, in quantity, but in spirit, in the quality of our unity.

About 45 percent of all the Jews in the world reside in Israel, that’s close to 7 million. The United States, with 6 million Jews, represents the second largest Jewish community globally. In the face of growing antisemitic events in the world, we were supposed to see new waves of immigrations to Israel, but that is not the case. There is no correlation between the increase in the number of Jews on the one hand and the pressure on them on the other.

Antisemitism is hardly a factor influencing Jews to immigrate to Israel because they are already accustomed to looking for a place to hide on earth despite the fact that it is round and connected and there is literally nowhere to run to. Sooner or later they are exposed to hatred.

It always seems to the Jews that they have managed to find a safe haven, but it is only on the surface, like a child who closes his eyes and thinks the danger has passed. Jews have an innate urge to live among the nations of the world, and the possibility of living among Jews in the Land of Israel does not appeal to them.

Diaspora Jewry is not where the State of Israel can cast its hopes for the future, nor do we need to because numbers have no significance. As it is said about the people of Israel, “You are a few of all the peoples.” The might of the Jews is not measured by our numbers but by the quality of our connection.

Today we do not feel the strength of the spirit in the people of Israel because we are divided and conflicted, immersed in material and earthly struggles. When we are properly united, we create an extraordinary spiritual force. It is the quality of the relationships and connections between us that determines the intensity of that force.

The opposite happens in our current state. The Jewish People’s Policy Institute has recently warned of the erosion of the Jewish people that has intensified in the past year and is reflected both between Jews and in their relations with the rest of the world. One of the reasons for this, as the researchers suggest, is the distance of the younger generation from Israel and the weakening of their Jewish identity.

Even if there are a plethora of organizations aimed at connecting the Jews wherever they are, they are also split, arguing, divided by partisanship. We are confused in thinking that Jews can prevail when they are weakened by political polarization which has no grip in Judaism that speaks only of unification. The people of Israel are founded on the principle of being as one man in one heart. When the people are partisan, the Jewish idea is dead.

This is the only problem the people of Israel have. We do not realize how critical our connection is. Our fate depends on that because if the Jews connect above all differences, in this they bring peace within them, which is then poured out to the whole world. Judaism has only one ideology: to be as one. This is called “being with the Creator.”

We just need to drop the political discourse, the shouting over opposing opinions, and connect together above all the differences. This is the only thing that can help us strengthen the nation. We must strive for a situation where we decide not to consider anything other than a clean and authentic desire to be brothers and sisters. Think of a mother who has a million children. How does she want to see them? This is how we should behave toward each other.
[287544]

“Where Europe Is Going” (Linkedin)
Podcast Powered by podPress (v8.8)