My new article on Linkedin “Why Lebanon Isn’t Switzerland Anymore” 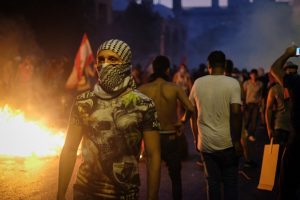 In addition to Lebanon’s severe water and food shortages, and collapse of the power grid, Hezbollah is once again shooting rockets at Northern Israel. It may seem like the beginning of yet another bloody chapter in the chronicles of this tormented country, but I believe this time it is little more than a “text message,” of sorts. By all indications, Hezbollah does not think this is a good time for war since engaging in a military campaign in Lebanon’s current state might push the country over the edge and will erase it from the map. Israel has no interest in that, and it seems like the other side has no interest in that either.

Lebanon has been “on life support” for many years, and I think that many countries and regimes prefer it this way, so I see no end to this in sight. Lebanon was once dubbed “Switzerland of the Levant.” It had flourishing tourism, beautiful beaches, a bustling economy, and openness to the West. But when the Lebanese Civil War broke out in 1975, everything collapsed and has not recovered since. Over the years, Lebanon has become a pawn in the hands of much bigger players who benefit from the country’s sustained ruin. The ones who suffer most, of course, are the Lebanese.

If they wanted to, Lebanon’s fellow Arab countries could have lifted it back from rags to riches, but they don’t want to help this poor little neighbor of theirs, and so Lebanon is fading like the rest of the Middle East.

As though its own problems were not enough, the disintegrated Syria has both overtook Eastern Lebanon and “infused” it with over a million Syrian refugees. A million refugees may not sound like many people to a country like the US, but to Lebanon, those million Syrian immigrants make up almost a quarter of Lebanon’s entire population, adding an enormous pressure to the already dilapidated infrastructure of the country and its dysfunctional utility grid.

Regrettably, I can’t say that I’m surprised to see it happen. When you let a terror organization govern a country, the result is total collapse.

Nevertheless, if there is a will, there is a way. First, these countries must be cleared of Hezbollah and other terror groups; then the reconstruction can begin.

I am often asked how long Israel can remain an island of stability in such a shaky region. My answer is this: It depends only on us. The more united we become, the stronger we will be. It has nothing to do with the state of the countries around us because Israel depends on itself.

We were given this land in order to carry out our historic role: To be a light unto nations by setting an example of unity. If we increase our unity, our social cohesion, we will be safe and secure. Moreover, we will set an example that countries around us can follow and resolve their problems quickly and efficiently. No other solution can do that.

As long as we are divided and hate one another, as we do today, the world hates us and blames us for its woes. It will demand of us to remedy the situation in all the countries around us and around the world, but we will not be able to help any country until we remedy our own division.

This has been our vocation since the birth of our nation at the foot of Mt. Sinai. It has been the dream and the goal of all our sages, and we will have no peace until we make their dream ours and realize it.

The world needs peace, harmony, and stability, and it all begins with the unity of our nation. If we want to help our neighboring countries, we should learn to love each other. This is all the “teaching” that the world needs from us.

For elaboration about the connection between Israel’s unity and the world’s prosperity, please read Like a Bundle of Reeds: Why unity and mutual guarantee are today’s call of the hour.
[286006]

“How Can Everyone Acquire Access To Clean Water Without Conflict?” (Quora)

“WHO Is Asking For Consideration” (Linkedin)
Podcast Powered by podPress (v8.8)