“The Soil Does Not Want Us Here” (Linkedin) 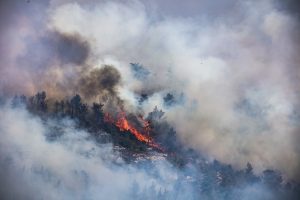 Over the past three days, there has been a massive forest fire (in Israeli proportions) raging in the hills around Jerusalem. The fire is already the largest in recent decades, and perhaps the largest since the establishment of the State of Israel. There are rumors as to how this fire started, but there is only one reason that it got so big: The soil does not want us here. If we do what we must do in the land of Israel, we will receive a different “treatment” from the land, as well. Otherwise, it will reject us and eject us.

It is summer, and summertime is fire-time. This summer, there have been unprecedented fires all over the world. However, while fires across the world happen mostly naturally, most of the fires that erupt in Israel are the result of arson perpetrated by our enemies.

Nevertheless, not every arson becomes such a major forest fire as this one. It is no coincidence; the ground itself is telling us to leave; we have worn out our welcome.

We came here, specifically to this land, the land of Israel, to be the people of Israel, the people who wear the motto “Love your neighbor as yourself” as a crown over their heads. The world supported our coming here. It voted in favor of our coming here on November 29, 1947. If the vote were held today, no one would vote in our favor.

We have exhausted the world’s support through our insistence on internal bickering instead of forming a united nation that sets an example of bridging differences with love. Instead of living out our legacy, we have become an example of the opposite. This is why the world has turned against us.

Now, the land itself has also turned its back on us. It will make our lives here progressively unbearable. Our neighbors, too, will haunt us with the world’s support, and we will feel that we have nowhere else to turn but to each other.

We need not wait for matters to become so dire. We’ve always felt that unity will carry us through anything. This is why we have always united when war broke out and our enemies sought to push us out to sea. Now that our daily lives are becoming warlike, we must continue to employ this tactic or our lives will become a losing battle.

We needn’t come to it. If we use crises as springboards to enhance our unity, we will see that this is why they happen in the first place.

Then, the world will know that it was right in placing us together in our land, that we have earned the right to be here. Then, too, the soil will welcome us—its long lost children who have been away for centuries due to their own division.
[286365]