My new article on Linkedin “Behind Iran’s Power Play” 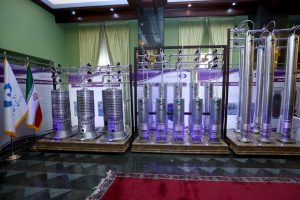 Since the rise of the Shi’ite regime in Iran, the country that used to be on good terms with Israel has been promoting an extremist ideology against the Jewish state. In recent months, the rhetoric has become so pugnacious that words have spilled into actions at sea, with attacks on merchant ships, and on land, through its proxies in Lebanon and Gaza. Now that Iran is “only around 10 weeks away from acquiring weapons-grade materials necessary for a nuclear weapon,” according to Israel’s Defense Minister Benny Gantz, we should ask ourselves where we are going with Iran and what we can do about it, if anything at all.

As I see it, the only country that is genuinely concerned about the prospect of Iran acquiring nuclear weapons is Israel. For the rest of the world, their worried statements are just that: statements. They have greater worries than Iran’s pursuit of nuclear weapons. Its neighbors might also be somewhat concerned, but no one is really that worried about it besides Israel.

Therefore, I have no doubt that Iran is on its way to obtaining nuclear bombs and becoming a nuclear power. Their national pride requires that they do not stay behind the rest of the world; they are adamant about obtaining the bomb and they will get what they want, which is not the bomb itself but rather the world’s respect.

Yet, once Iran achieves respect, I don’t think that it will go beyond that. Their leaders’ threats may be militant, but I think that they are just that: threats, and nothing more.

We shouldn’t underestimate the astuteness of the Iranian people. They are a nation of merchants; they know what buttons to push and how tight they can pull the string without snapping it. I think that a direct confrontation is simply not their style; they’re smarter than that. They’re nature, as I said, is that of business people, and in business, power play is key, but you mustn’t go too far. Iran knows that if Israel is pushed against the wall, it’s got overt and covert ways to retaliate decisively and destructively, and Iran is smarter than to try Israel out.

Therefore, I think that our real problem is not with Iran. If we want a good future, we need to focus on ourselves, and not on what other countries are doing. If the people of Israel were united, they wouldn’t worry about other nations’ weapons.

Our unity is more powerful than anything. If we had it, it would neutralize not only other countries’ weapons, but their desire to fight against us. It would even turn their hatred toward us into love. It is just as the book Maor VaShemesh writes: “The prime defense against calamity is love and unity. When there are love, unity, and friendship between each other in Israel, no calamity can come over them. … [When] there is bonding among them, and no separation of hearts, they have peace and quiet, and no Satan or evildoer, as by this [unity], all the curses and suffering are removed.”

Our unity can do much more than protect us from harm; it can shift the world from the belligerent mindset it is in today, to a much quieter and friendlier approach. Our nation was created to be an example of unity; once we set it, the rest of the world will follow. This is why one of the most famous antisemites in American history, Henry Ford, wrote in his virulent composition, The International Jew: The World’s Foremost Problem, “Modern reformers, who are constructing model social systems on paper, would do well to look into the social system under which the early Jews were organized.”

The nations are looking to us for example, for leadership toward unity, while we are displaying the opposite. Nothing is more powerful than unity; it is the foundation of existence. Everything is connected and united; everything is harmonized and synchronized with everything else. When we operate like the rest of reality, we derive our strength from there, from the very root of everything. This is the vital force that everyone wants, including the Iranians. Rav Kook once wrote, “Since we were ruined by unfounded hatred, and the world was ruined with us, we will be rebuilt by unfounded love, and the world will be rebuilt with us.” Indeed, here, in mutual love, lies the key to our victory, and to the victory of all of humanity right along with us.
[285914]

“Can A Person Be Perceptive Enough To See Our Planet In A Way That Tells Them That They Too Are A Part Of Nature?” (Quora)

“Why Do We Still Believe More In Nationalism Than In Humanity As A Whole?” (Quora)
Podcast Powered by podPress (v8.8)