“As Clay In The Hands Of The Coach” (Linkedin) 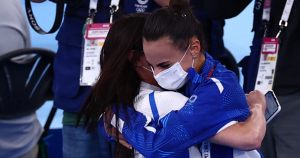 Perhaps one of the most symbolic images from the Tokyo Olympic Games that ended last week was that of Israeli gold medalist Linoy Ashram, who, after receiving the medal, went to her coach and hung the medal on her coach’s neck. With this symbolic act, Ashram stated that she felt her coach, Ayelet Zusman, deserved the medal just as much as she did.

Indeed, to an athlete, a coach is everything, as a mother and a father to a child. Without the coach, an athlete is an unpolished diamond. The coach turns the talent into medals through the athlete’s hard work. The bond between the two is truly unique; it can’t be otherwise.

An ancient truism in the Talmud reads as follows: “One might be jealous of anything except one’s son and one’s disciple” (Sanhedrin 105b). Indeed, a true teacher puts everything he or she has into the student, and whatever the student achieves, it is as though the teacher has achieved it, too.

I, too, had my teacher, my “coach,” if you will. He taught me everything I know, and to this day, I feel him accompanying me. If I ever achieve greatness, it will certainly be thanks to him.

Likewise, I hope and pray that my own disciples will achieve what I have achieved and more, and that they will become humanity’s teachers and lead humanity to unity and love of others. To a teacher, the disciple is his hands, his mind. You put into the disciple everything you wanted to achieve so the disciple will carry it forward. It is a bond that is beyond love, and in the case of the wisdom of Kabbalah, it is a commitment that both teacher and disciple make for the sake of all of humanity.
[286123]

“How Can The Increase In Access To The Internet Among Low-Income Communities Help To Promote Social And Economic Development?” (Quora)

The Future Will No Longer Worry Us
Podcast Powered by podPress (v8.8)