“The UN Against Israel (Again)” (Linkedin)

My new article on Linkedin “The UN against Israel (Again)” 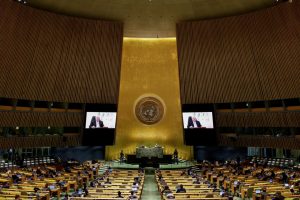 Once again, the United Nations exposes its antisemitic face. A few days ago, the UN General Assembly approved permanent and robust funding for a committee established by the Human Rights Council to investigate Israel’s alleged human rights violations and “war crimes” against Palestinians in the wake of “Operation Guardian of the Walls.” That military operation was launched by the Israeli army in response to last May’s massive rocket attacks on the Jewish state.

Just recently, rockets fired at Israel from Gaza struck the coast of Tel Aviv. Consequently, the IDF (Israel Defense Forces) carried out retaliatory airstrikes to hit Hamas targets. According to the UN’s ongoing criticism of Israel’s actions, it asserts that Israel does not have the right to defend itself.

It is already clear that hatred of Jews sets the agenda at UN. It clearly is not based on visible reality, but springs from uncontrollable antisemitism that leads the member states of the UN to set up committees, compile documents, and organize meetings that will eventually lead the organization to reconsider the establishment of the State of Israel. They will say, “We reverse the same decision we agreed to and hereby abolish the State of Israel. We have no idea why we agreed to the establishment of the Jewish state in the first place, but the last few decades have convinced us that it was an historic mistake. So all we have to do is decide what the process of abolishing the state and returning the land to the Palestinian people will be.”

This is what I expect to happen in the future. The international community will happily take Jerusalem and the surrounding areas from Israel and hand them over to the Palestinians. Exactly how soon will this happen? It’s hard to say, but with the support of the UN it could happen very quickly.

Everything is ready, the departments are ready, and the forces are ready. There is no problem at all. The truth is that I fear that many Jews in Israel will not lament the decision, but will even support it wholeheartedly.

How can such a phenomenon arise? It is because we lack education and awareness of our role as the people of Israel. We do not have a clear educational plan that makes it clear to everyone who they are, what their heritage is, and what their role is. We give up our principles and roots until one fine morning someone in Israel gets up and thinks, “The UN decisions are democratic and liberal, we have to take the other people (the Palestinians) into account. They deserve the land, and us? We can handle it, we will give them the land they claim.” Any Jew who gives up this piece of land is not connected to Israel and does not feel that it belongs to him or her.

Not all Jews are like that. There are many good people who love the land and will try to stand up and fight against anti-Israel decisions, but the question is how strong they will be. When the UN decides, armies of the neighbors will come here, and then what will we do? How will we fight when the whole world rises up against us?

Ultimately we can triumph over any threat and prevail only when we use the help found in our people’s, the Jews, special spirit. We can tap into it only when we connect together and really become Israel (Isra – El—Yashar Kel [straight to the Creator]). When we fight together for the Jewish ideology and spirit and awaken the forces of connection between us, we forge the connection with the upper force, the supreme power. And then the war from below will be a “war from above,” the war of the evil forces against the good and benevolent power that rules the world.
[291872]

“When Violence Is Not A Crime” (Medium)