“Remember The Past To Protect From The Future” (Linkedin) 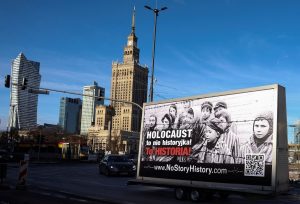 A week ago, the Ruderman Family Foundation released a report examining antisemitism in the US today. According to the report, “Ninety-three percent of American Jews are concerned with the current levels of antisemitism in the United States, with nearly half of U.S. Jews (42%) experiencing antisemitism either directly or through family and friends over the past five years alone.” It turns out that American Jews, who thought, “This would never happen in America,” are facing the same old hatred that every Jewish community in the Diaspora has experienced since the ruin of the Temple nearly twenty centuries ago.

No online or offline efforts to curb expressions of antisemitism will help. Antisemitism will exist as long as its root exists. It will keep growing until its engine, the core reason for its existence, is uprooted. And only we, Jews, can tear it out because the root exists within us.

Some months ago, Oren Jacobson, co-founder of Project Shema, which helps Jewish students, leaders, organizations and allies explore the difficult conversations surrounding Israel and antisemitism, published an op-ed on Jewish Telegraphic Agency (JTA). In the column, he lists some of the accusations that antisemites use as pretexts for hating Jews. “Jews get attacked for supposedly controlling the world (governments, banks, media),” he wrote, “for being disloyal to our home countries, for killing Jesus, for making up the Holocaust, for being greedy, for undermining the white race and subverting people of color (among other things). We’ve been blamed for plagues, famine, economic hardship and war. Whatever major problem a society has, Jews have been blamed for it.” In other words, as retired General William Boykin once stated, “The Jews are the problem; the Jews are the cause of all the problems in the world.”

The Ruderman report was released on January 20, the 80th anniversary of the Wannsee Conference, when the Nazis devised the “final solution to the Jewish question.” A week later, on January 27, which is today, is the International Holocaust Remembrance Day. There are other memorial days surrounding the Holocaust, but none of them will protect us from the next tragedy. If we want to avoid another reason for establishing even more memorial days, we must recognize that the key to solving the problem is within us, and get proactive about solving it.

The key to solving antisemitism lies in eliminating our internal divisions. Throughout history, our unfounded hatred, the hatred that cost us the loss of our sovereignty in the Land of Israel, has also inflicted on us all the persecutions and exterminations we have experienced since. For us, “Love your neighbor as yourself” is not an empty slogan; it is a commandment that we must obey if we want peace and quiet in the world. The world accepts us only when we accept each other. If we hate each other, the world hates us in return for our hatred of each other. This may seem counterintuitive, but it is true nonetheless.

In 1929, Dr. Kurt Fleischer, leader of the Liberals in the Berlin Jewish Community Assembly, sensed why the Germans were becoming increasingly antisemitic. He stated, “Anti-Semitism is the scourge that God has sent us in order to lead us together and weld us together.” Regrettably, the awareness of the linkage between antisemitism and internal disunity did not penetrate deep enough, and the result was catastrophic. This time, we must let the message sink in so that our generation does not suffer the consequences of our hatred for each other.
[293216]

“What Is Global Interdependence? What Are Some Examples?” (Quora)

“Remembering The Holocaust: What Is New About Old Antisemitism” (Times Of Israel)
Podcast Powered by podPress (v8.8)