Continuing The Congress With An Ascent

Spiritual work is unlike our regular work in this world. In everyday life, we are used to the fact that if we get up in the morning, go to work, take care of family and society in the evening, this is what life is all about. But spiritual life is not measured in this way. In spiritual work, the achieved level or state is considered zero relative to the next state, which is measured only by the difference, the addition to the prior degree.

Each new state has to be greater than the previous one, which means that we are entering spiritual life. Otherwise, it is not spiritual but corporeal.

If any success lasts longer than the moment it was achieved in, it turns into a corporeal and egoistic state. It is no longer considered that we are aimed at the Creator, at spiritual work. There is nothing spiritual or unique about it. Therefore, the group must be concerned with constantly renewing its spirit. If the impression of what was achieved lingers to the next moment, it loses its flavor.

We did tremendous and important work at the congress, but all this is already in the past. The states should change at a pace of breathing: inhale—exhale. We cannot accept absence or renewal. Usually, after such major congresses, we tend to fall into a slumber, like hibernating animals.

It usually takes about a week to calm down after such sharp spikes and return to normal. Most importantly, do not give in to such transitional states. With electricity, such transitional processes always take place when the system comes out of balance after sharp shifts and need time to stabilize.

The congress itself is a giant jolt upward followed by a sharp fall in which everything depends on the work in the group, on the connection between us, rather than the internal work inside each of us. Each one of us is a zero, but there is the ten that creates something new. 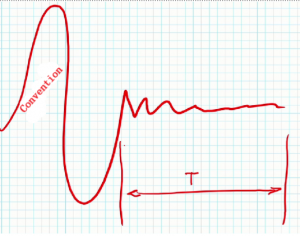 Naturally, a person cannot feel the rising spirit, the desire, or the drive forward on his own. It is good that we do not feel any of it because this is precisely what lets us create a new corrected state together.

Spiritual work is increasingly powerful unity of friends in the group; there is nothing else. Strive to achieve this unity faster so that the upper light can reign between us. It depends on our unity. We must make efforts to unite in such a way that the power of unity is revealed in us even stronger, until we reveal the power of love. The power of love is already the Creator.1

The spiritual state ends the moment I begin to feel it. If I can sense it, it means that it has already gone. Now we have to create a new state by connecting and uniting with the friends. The previous state was given to us by the Creator, it was Him who organized the congress and ensured its success. And now, after this success, we must “bring a sacrifice” because it was not us who guaranteed the success, so we must be grateful to the Creator for all the work that has been done. He did it as an example so that we would be able to execute it ourselves and create a permanent result in us.

We are seemingly returning to the same state as at the congress, but through our own efforts. We no longer receive awakening from above, which let us unite at the congress in the desert. If we continue to exert our own efforts, not only will we bring back the recent unity, but we will be able to attain in our own Kelim what this awakening entailed.

There is no need to think of the prior states. Doing so is a Klipa. We need to aim toward greater and greater unity. We will not feel it the way we did in the past because the Kli is always changing, and we are reaching new states within the connection.

It doesn’t matter what happened in the past. The Creator gave us an example that left an impression on us, awakened us, and now all we have to do is keep on working.2
From the 1st part of the Daily Kabbalah Lesson 3/2/20, Continuing the Congress with an Ascent
1 Minute 1:27
2 Minute 9:30

Related Material:
Continuing The Convention With An Ascent
No Descents, Only The Ascent!
Steady Ascent

“Is There A Treatment For The Coronavirus?” (Quora)
Podcast Powered by podPress (v8.8)